Does the Academy discriminate against conservatives? 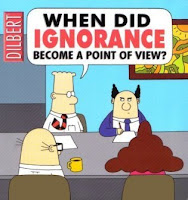 by Massimo Pigliucci
The latest from University of Virginia cognitive scientist Jonathan Haidt is that people holding to conservative values may be discriminated against in academia. The New York Times’ John Tierney — who is usually a bit more discriminating in his columns than this — reports of a talk that Haidt had given at the conference of the Society for Personality and Social Psychology (this is the same Society whose journal recently published a new study “demonstrating” people’s clairvoyance when it comes to erotic images, so there). Haidt polled his audience and discovered the absolutely unastounding fact that 80% were liberal, with only a scatter of centrists and libertarians, and very, very few conservatives.
“This is a statistically impossible lack of diversity,” said Haidt, noting that according to polls, 40% of Americans are conservative and only 20% liberal. He then went on to make the (truly astounding) suggestion that this is just the same as discrimination against women or minorities, and that the poor conservative academics are forced to live in closets just like gays “used to” in the 1980s (because as we all know, that problem has been solved since).
I have criticized Haidt before for his contention that progressives and conservatives have a different set of moral criteria, implying that because progressives don’t include criteria of “purity,” in-group loyalty and respect for authority, their moral spectrum is more limited than that of conservatives. My point there was that Haidt simply confuses character traits (respect for authority) with moral values (fairness, or avoidance of harm).
As far as this new controversy goes, there are so many ways to make fun of it that I’m having a hard time not indulging in a Jon Stewart moment about it. I will refrain from taking that easy route, but suppose that — as I think is highly probable — the overwhelming majority of people with high positions in Wall Street hold to libertarian or conservative views. Would Haidt therefore claim that liberals are being discriminated against in the financial sector? I think not, because the obvious and far more more parsimonious explanation is that if your politics are really to the left of the spectrum, the last thing you want to do is work for Wall Street in helping make the few outrageously rich at the expense of the many.
Similarly, I suspect the obvious reason for the “imbalance” of political views in academia is that the low pay, long time before one gets to tenure (if ever), frequent rejection rates from journals and funding agencies, and the necessity to constantly engage one’s critical thinking skills naturally select against conservatives. (Okay, the last bit about critical thinking was a conscious slip that got in there just for fun.)
I have spent decades (gulp!) in academia, and I have rarely seen open discussions of political views over lunch, and never (I repeat, never) in faculty meetings or during hiring interviews. I have never (I repeat, never), either in the sciences or in the humanities, seen a candidate’s political views come into into consideration for hiring, and in fact I have never known anyone of my new colleagues’ views on politics until much later, if we became friendly enough to discuss them over a beer (and let me tell you, my experience is that biologists and philosophers rarely talk about anything other than biology and philosophy with colleagues anyway).
What about Haidt’s claim that “anywhere in the world that social psychologists see women or minorities underrepresented by a factor of two or three, our minds jump to discrimination as the explanation”? I’d say that if that is the only reason their minds jump then they don’t know how to do their work (hmm, perhaps that explains the publication of articles on ESP in their leading journal...). But I seriously doubt that is what’s going on, and I suspect that Haidt is either an incompetent psychologist (not likely) or is disingenuously saying the sort of things controversial enough to get him in the New York Times (more likely).
A serious social scientist doesn’t go around crying out discrimination just on the basis of unequal numbers. If that were the case, the NBA would be sued for discriminating against short people, dance companies against people without spatial coordination, and newspapers against dyslexics. Claims of discrimination are sensibly made only if one has a reasonable and detailed understanding of the causal factors behind the numbers. We claim that women and minorities are discriminated against in their access to certain jobs because we can investigate and demonstrate the discriminating practices that result in those numbers. Haidt hasn’t done any such thing. He simply got numbers and then ran wild with speculation about closeted libertarians. It was pretty silly of him, and down right irresponsible of Tierney to republish that garbage without critical comment. Then again, the New York Times is a known bastion of liberal journalism...
Posted by Unknown at 8:12 AM