In Egypt, accepting democracy despite its risks 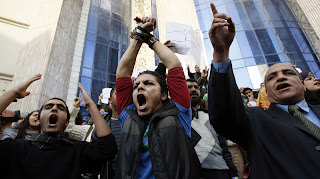 by Michael De Dora
A recent political cartoon presumes to depict the current situation in Egypt as a potential transition from an autocracy – the 30-year rule by President Hosni Mubarak appears to be coming to a close – to either a theocracy or a democracy. It illustrates the question that many are currently asking: in which direction will this important Middle Eastern country swing?
As it turns out, Egypt already has slivers of both theocracy and democracy. Its Constitution is rather Islamic (though it does not require all laws to perfectly conform to Sharia), but its penal system is secular, and the people have some power (hopefully, more when Mubarak leaves). What many people fear is that under new democratic reforms, the Muslim Brotherhood will gain power and move Egypt toward a stronger Islamic orientation, resembling a theocracy (1, 2). This has even led several people to question whether we should really want Mubarak out of power.
Yet while this concern is understandable, it should not be used as an argument against the full embrace of democracy in Egypt. Yes, the process through which Islam might take a stronger hold over Egyptian law would be democratic. But the fact that the Brotherhood might take more control – or more generally, that religion might influence law – is not a problem with democracy. It is a problem with religious belief. At the same time, some religious influence is not enough to turn a country into a theocracy. Consider the U.S.: we have our fair share of religiously based laws, but we are not a theocracy. In the same way, an increased role for the Muslim Brotherhood in Egypt wouldn’t necessarily make for a theocracy either.
Let me be clear: I reject religious belief as a basis for public policy (or anything else for that matter). It is unsupported by reason and evidence. Furthermore, in a pluralistic society, its precepts cannot be forced on people who are non-religious or of a different religious persuasion. I believe that only a secular governmental foundation can securely provide natural human rights and freedoms everyone can accept and support, and I think that our discourse and policies should reflect this secular orientation.
But I also recognize that democracy does not guarantee a secular society or politics. Democracy only guarantees people the right to speak and act their minds, and the power to create, revise, update, and change the laws as they wish. Thus, whatever social dynamics are at play will alter the foundations of government. The legal and political landscape will look different depending on what the citizens believe. If the people are religious, the laws will reflect that.
Fortunately, there are two constraints on this dynamic. One essential constraint is provided by a Constitution (or other founding document). The U.S. has a firm secular grounding that makes theocracy near impossible. Unfortunately, Egypt does not, and this should be of concern. The other constraint is we the people. We are bound to disagree with attempted or actual changes to our society and laws, but we need not sit back and accept the changes we dislike. In a democracy we all have the opportunity to state our case in the public square, and to have a say in the makeup of our government. This is both our right and our duty.
So the real problems in Egypt are not the possibilities opened up by democratic change, but its Constitution, and the beliefs that help underwrite its support. We should not lament the freedom to believe and act and influence our (or any) government. We should not be overly cautious about democracy because of the consequences that may follow from its exercise. Instead, we ought to work to preserve or foster a secular foundation, and fight pernicious ideas that may undermine democracy at their roots. Through this process, back and forth – and hopefully forward – our social, political, and moral compasses change. But there is no guarantee things will go our way, as an unknown future is a cost of an open society. I happen to think liberty is worth it.
Posted by Unknown at 10:20 AM