On the Evil of George R.R. Martin 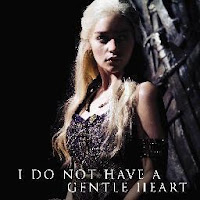 
The warning issued forth as I handed my Game of Thrones DVDs to an uninitiated friend. We sci-fi/fantasy geeks have been giving similar warnings for the past several television seasons as “A Song of Ice and Fire” has gone from a literary cult favorite to a broad cultural trend. Well: we told you so. (You might not want to click on that link, or the next two, if you remain one of the uninitiated and wish to maintain a virtuous ignorance.)


I’m not immune to (some) broad cultural trends, and so I found myself discussing last week’s much-talked-about episode of “Game of Thrones” with another friend. In particular, we talked about how George R.R. Martin, author of the “Ice and Fire” series, responded to the above-linked video. “Did you see him laugh?” my friend asked. “The man is evil.” My friend is not alone in his judgment. (Again: do not click that link if you don’t want to know why Martin is evil!)


Somewhere down a mental corridor of mine that’s supposed to be closed off for summer vacation, a pedagogical switch flipped. And so here we are, about to evaluate my friend’s claim [1].


It is the height of presumption for a writer to say something like, “that joke works because...” and so I won’t claim that my ambiguous spoiler alert actually does work as a joke. Nevertheless, it’s effectively uninformative because it’s true on such an unfortunately general level. Random, senseless death is commonplace throughout Martin’s story -- just as in real life, his terribly morbid fans remind us. It is for this reason that a series wherein there is potential for a fight between dragons and zombies can be cited for its verisimilitude [2].


You might think that I’m about to suggest that George R.R. Martin can’t exist because he’s evil. That would be an interesting argument, contradicting the facts as it so clearly does. Alas: I am neither brave nor European enough to attempt such conceptual sleight-of-hand. My relatively modest goal right now is just to explore whether or not George R.R. Martin’s treatment of his characters makes him evil. The Problem of Evil is just a useful tool for that exploration.


The Problem of Evil is one of the more straightforward examples of conceptual analysis through critical reasoning. As the argument goes: one ought to prevent evil (such as wanton death) if it is in her power; by definition, it is always in God’s power to prevent evil; evil happens anyway; therefore, no God. The soundness of this argument depends on a particular conception of God: that is, a being that is omnipotent, omniscient, omnipresent, and omnibenevolent. Omnipotence is the ability to perform any possible action; omniscience is knowledge of the truth values of all logically consistent propositions; omnipresence is location in all times and places; omnibenevolence is complete moral virtue. The theologian is therefore presented with a choice: either accept the Problem’s conclusion or deny that God really is the bee’s proverbial knees [3].


In fairness, there are other responses available, although none of them is particularly compelling [4]. When I discuss the Problem of Evil in class, those are generally the responses my students offer, leaving me to explain why the Problem remains. The responses themselves are beside the point right now. What’s more important is how I try to explain the given conception of God.


The Gospel of John opens with the line, “En archē ēn ho Lógos, kai ho Lógos ēn pros ton Theón”: in the beginning there was the Word, and the Word was in God. The Greek word “logos” is philosophically loaded, to say the least; John (probably) isn’t saying that God created the universe with words [5]. Nevertheless, the phrase is illustrative. Authors stand in relation to their works as God is supposed to stand in relation to the universe.


In creating a story, an author is essentially omnipotent, omniscient, and omnipresent. There are no limits on what the author can create, or how she can make her creation behave, save for imagination and logical consistency [6]. Since the author is creating the story’s world, she has the completest possible knowledge of all states of affairs in the story. Finally, the author stands outside the story’s time and space; by holding the completed work in her hand, she is essentially everywhere relative to the story [7]. When characters in the “Song of Ice and Fire” series speak of their “one true god,” it’s difficult for me not to imagine George R.R. Martin smiling bashfully.


But is the artist omnibenevolent towards her work? Is Martin obligated to prevent evil from befalling his characters? Asking these questions forced me down another mental corridor that I had previously closed for repairs: the one behind a door marked “Aesthetics” [8].


On the face of it -- and I’ll bet you thought I was going to say “prima facie”! -- it’s obvious that an author doesn’t have any obligations towards the characters in a story. After all, the story is fictional; the characters don’t exist. But it’s conceivable that we might have obligations towards non-existent people. Jeremy Bentham made provision for future generations in his utilitarian calculus, and future people are people who don’t exist yet. However little utility I may find in utilitarianism, it should at least be clear that we aren’t self-evidently free of obligations to fictions.


The relation of artist to artwork has long been a matter of intense debate among philosophers of art. On the one hand, some philosophers (including E.D. Hirsch and Richard Wollheim) argue that the meaning of an artwork is derived from its creator’s intentions; on the other hand, others (most notably W.K. Wimsatt, Jr. and M.C. Beardsley in their influential article “The Intentional Fallacy”) argue that the author’s intention is irrelevant to an artwork’s meaning, which is left (at least in part) to the audience. I have no horse in this race. But it does strike me that the side one takes in this debate is relevant to the question of whether or not George R.R. Martin -- or any artist who visits misery upon her creations -- can be considered evil.


Sitting on the debate’s sidelines, it seems to me (although I’m happy to be proven incorrect) that a greater proportion of aestheticians reject the importance of authorial intent. Even in this case, however, the author has obligations: not to the artwork itself, since the artwork’s meaning will be determined by the work’s audience, but to the audience. After all, the artwork must be something interpretable: it must be the sort of thing that generates a response in the audience. By this standard, Martin isn’t doing anything wrong: he presents death as a matter of fact and leaves it to his readers to evaluate those deaths as good or evil. If anything, one might say that Martin is doing us a moral good in providing us with the means to confront our evaluative judgments [9].


I take it that things are somewhat different for our evaluation of Martin’s character if authorial intent does matter. In that case, the author is omnibenevolent relative to the artwork by definition: the artwork is meant to serve the author’s purposes, and so the author’s obligation is to create the work that best fulfills that function. Whatever the author creates ought to be best for the artwork itself, audience be damned. When Martin kills one of his beloved creations, that death is for the best because it serves the work, however vile and despicable the cause of death may be (see note 4). Does it follow, then, that Martin still isn’t evil?


It might, but only if you haven’t read Plato’s “Euthyphro,” and let’s face it: if you’ve spent any time on this blog, there’s simply no excuse for that (it’s free, for heaven’s sake!). Martin may be obliged to do what is best for his artwork, but it doesn’t follow that everything he creates is good so long as it’s created according to his wishes. Even if you accept that the author is a god relative to her art, the author is nevertheless one of us, and so bound by whatever ethics may bind us. Martin may relish the pain and suffering of his characters, or he may want to communicate the revulsion we should feel from the observation of pain and suffering. In the former case, most moral theories would judge him poorly because sadism is pretty uncontroversially bad; in the latter case, many moral theories would judge him poorly because he’s taken the role of the manipulator, either of his creations or of his audience. Martin can create his own new worlds, but it doesn’t follow that he’s created his own new morality.


So: is George R.R. Martin evil? Maybe not, but only if the author plays no role in the evaluation of artwork. If the author does play such a role, then maybe he is.


Or maybe it doesn’t matter at all, because a rational denizen of Westeros might be justified in concluding that Martin doesn’t exist in the first place.
_____


[1] Besides, I’ve already written enough about this week’s other hot topic.


[2] I won’t lie: my only reason for using that word is to justify memorizing it while studying for the SATs.


[3] I was once faced with the task of explaining this colloquialism to a non-English speaker. The phrase is just homophonous with “the business,” which makes much more sense than my meek offering of “kneed bees beat regular bees, which don’t have knees.” Don’t say that I’ve never taught you anything useful.


[4] My students normally offer up some variation on these responses. God gives us free will! (Wonderful: you deserve a choice between “Teen Mom” and “Real Housewives,” and that’s why we have earthquakes in populous areas.) Without evil, we could have no knowledge of what is good! (That’s great: I won’t be able to stop my nephew from punching me until he learns about the Spanish Inquisition.) She moves in mysterious ways! (I normally grant that one just because it’s such a great song.)


[5] Of course, creation ex nihilo makes just as much sense if a creator does it with words, with hand gestures, with music, or with stacks of turtles. It all amounts to the same thing: magic!


[6] As I’ve said before -- see the second link in my first note -- neither of these constitutes a true limitation on a creator’s power. The inability to perform impossible actions does not impinge a being’s ability to perform any possible action; put (again) in another way, if the only rule of Fight Club is that you can’t fight if 2+2=5, then there are no rules in Fight Club.


[7] I suppose that you could also say that she’s nowhere, but wasn’t my opening line pessimistic enough?


[9] Leo Tolstoy argued that the purpose of art is communication between author and audience. This is not the view under consideration here. By Tolstoy’s account, the author’s intention does matter: the author intends to convey some message or some emotion to the audience and the artwork is the vehicle of that communication. This has been your One Serious Footnote.
Posted by Unknown at 7:00 AM