Hanna Arendt: the movie, the philosopher 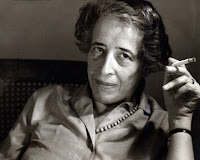 I recently saw Hannah Arendt, a rare movie whose protagonist is a philosopher. And an exceedingly well done movie, it is. I was lucky enough to go to the US premier of it, held at Film Forum in New York, and which was attended by the director, Margarethe von Trotta, the leading actress, Barbara Sukowa, the screenwriter, Pamela Katz, and the main supporting actress, Janet McTeer. This sort of thing is a major reason I love living in New York.

The movie centers around a crucial period of Arendt’s career, when she covered the trial of former nazi officer Adolph Eichmann in Jerusalem, on behalf of the New Yorker magazine. The result was a series of five articles that were then collected in a highly influential book, Eichmann in Jerusalem: A Report on the Banality of Evil. Yes, you’ve heard the phrase before, and that’s where it comes from.

Arendt was already famous at the time, a leading faculty member at the New School in New York, and the author of The Origins of Totalitarianism, which is why the notoriously picky New Yorker immediately accepted her offer to cover the Eichmann trial. Little did they know about the fury and heated controversy that Arendt’s writing would soon generate, a controversy that alienated her from some of her closest friends and family members, though it also made her the talk of the town and the idol of her students.

As I said, the movie is well worth watching because of the superb screenwriting, directing and acting, and von Trotta stressed — during the q&a following the first screening — that it is based on a painstaking analysis of the available documents, including letters from Arendt to her friends and family. Indeed, Arendt doesn’t come across as an unquestionable hero in the film. She was a complex woman and superb intellectual, embodying plenty of contradictions (she was the lover of famous philosopher, and nazi sympathizer, Martin Heidegger), and who had suffered personally at the hands of the nazis (she fled Germany, was interned in a camp in France, escaped and moved to the US).

The time of the trial was also highly sensitive: the new state of Israel was only 15 years old, headed by prime minister David Ben-Gurion, and the public trial of a high-level nazi operative was a defining moment in the identity of the new nation.

Arendt’s basic ideas where two: first, that Eichmann and many others committed their atrocities without deep moral awareness of what they were doing, more like bureaucrats who were chiefly focused on a desk job that simply had to be done (hence her concept of the banality of evil). Second, that part of the scale of the Holocaust was the result of the complicit attitude of the Jewish Councils in both Germany and Poland, since they helped the nazis to confiscate Jewish property and round up Jews to be sent to the concentration camps.

Predictably, the Anti-Defamation League branded Arendt a self-hating Jew (whatever that means), and began a vilifying campaign against her that almost cost her the position at the New School. Other Jewish organizations actually paid researchers to go through her book intensively searching for errors with which to discredit her. She certainly seemed to have touched a nerve.

A fair assessment of the whole story seems to be that Arendt did have some novel insights into what had been going on in nazi Germany, particularly the idea that a whole nation had participated in mass genocide not out of fear of reprisal from Hitler and his henchmen, and not even necessarily because they bought wholesale the nazi rhetoric, but simply because that was the zeitgeist of the time and because most people most of the time just go along with what they are told to do (as plenty of psychological experiments have shown since).

However, Arendt also did get some things wrong. Eichmann, as it turns out, was well aware of what he was doing, and he did it with gusto. To be fair, some of the documentation establishing this came out after the trial and the book, but an argument can be made that Arendt was taken in by Eichmann’s own defense, displaying a contradictory combination of insight and naiveté about her subject. To quote the New York Times review of the movie, “Arendt misread Eichmann, but she did hit on something broader about how ordinary people become brutal killers. The postwar generation of young Germans took Arendt’s book as inspiration to rebel against their parents, who may not have personally killed Jews during the war but knew what was going on and did nothing. In America, protesters invoked the ‘banality of evil’ to rail against the outwardly decent family men who dropped bombs on North Vietnam or sat in nuclear-missile silos, ready to push the button — seeing them as the cold war’s version of Arendt’s ‘desk murderers.’”

To me Arendt represents what is positive and what is questionable in the kind of philosophy she practiced, what is known as the “continental” (as opposed to analytic) approach. Continental philosophers, like Foucault for instance, are much more interested than many of their analytic counterparts in things that actually matter: social and political issues, rather than neo-Scholastic hair splitting about fine points of logic and semantics. However, and discounting those who make little if any sense (Derrida immediately comes to mind, and — more controversially — Arendt’s own mentor, Heidegger), continental philosophical writings often pay scarce attention to hard facts and tight arguments, preferring an almost literary style of essaying about their subjects. In Arendt’s case, her trust in her judgment over the available facts led to a botched job: her book was important and influential, but it could have been great and enduring had she had a bit of an analytic penchant for the factual details of the story.
Posted by Unknown at 7:00 AM