A brief detour through The Twilight Zone 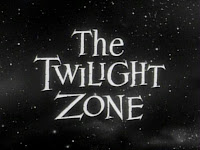 The end of another year and the start of a new one is quickly approaching, which means we are getting closer to one of my favorite annual events: The Twilight Zone marathon! As it has done for years now, the channel SyFy will air non-stop episodes of Rod Serling’s classic television show on Monday, Dec. 31 and Tuesday, Jan. 1. You can find more information, including a full schedule, on the SyFy website.

For most people I meet, The Twilight Zone (1959-1964) was an entertaining if not groundbreaking science fiction anthology series that set up extraordinarily hypothetical situations and ended with a twist few viewers saw coming. But for a devoted fan such as myself, the show did much more than just amuse its viewers: it explored the nature of the human condition. Through his storytelling, Serling (creator, executive producer, and often script writer) depicted the many flaws of the human mind and the wretched behaviors these produce – irrationality, authoritarianism, xenophobia, narcissism, and more – and portrayed what could happen if they were not recognized and dealt with head-on.

As Star Trek creator Gene Roddenberry put it, “No one could know Serling, or view or read his work, without recognizing his deep affection for humanity … and his determination to enlarge our horizons by giving us a better understanding of ourselves.” I would argue Serling wanted to do more than just enlarge our horizons: he wanted to motivate us to improve the world. Indeed, he once quipped that, “If you want to prove that God is not dead, first prove that man is alive.” I would also argue that a person cannot fully understand Serling’s passion without watching several episodes of The Twilight Zone.

As an inducement to readers of Rationally Speaking, what follows are brief summaries of ten episodes that in my mind best represent this passion, all of which will air during the marathon.

Aired during the proceedings of the Adolf Eichmann trial, this episode features former SS Captain Gunter Luntze returning to remains of the Dachau concentration camp to recall his time as commandant during World War II. While there, Luntze is haunted by the ghosts of the Jewish people whom he tortured and murdered. The conversation between Luntze and the ghosts covers many of the arguments made by Eichmann and other Nazi officers.

The episode concludes with Serling’s response to the question, “Dachau … why does it stand? Why do we keep it standing?” I find it so gripping that I will quote it in full:

There is an answer to the doctor’s question. All the Dachaus must remain standing. The Dachaus, the Belsens, the Buchenwalds, the Auschwitzes – all of them. They must remain standing because they are a monument to a moment in time when some men decided to turn the Earth into a graveyard. Into it they shoveled all of their reason, their logic, their knowledge, but worst of all, their conscience. And the moment we forget this, the moment we cease to be haunted by its remembrance, then we become gravediggers. Something to dwell on and remember, not only in the Twilight Zone but wherever men walk God’s Earth.

Will the Real Martian Please Stand Up? (Dec. 31, 7 p.m.)
On a cold, snowy night, two police officers receive word that a mysterious flying object has crashed in the woods. Upon reaching the site of the crash, the officers discover footprints that lead across the street to a diner. They follow the trail and find a group of bus passengers waiting out a storm. When the officers arrive, they ask the bus driver how many people were on the bus. He responds: six. Yet there are now seven passengers in the diner. What gives?

The officers employ their best detective skills in trying to determine which of the passengers is the alien. The surprising and enjoyable series of twists that end the episode underline two points. First, sometimes the people you think are most likely to be guilty are least likely, and vice versa. And second, sometimes assumptions, when accepted without question, too narrowly limit the focus of our scrutiny.

Serling reportedly wrote this episode in response to the assassination of President John F. Kennedy, which took place roughly four months prior. The plot in no way makes this fact obvious: in a small town, a man is set to be executed for a crime he most likely did not commit, while nonetheless the town’s inhabitants are looking forward to – indeed, celebrating – his public hanging.

But as the day progresses, the town is taken hold by an eerie and seemingly unexplainable phenomenon: despite the fact that the sun should be rising, the sky is continuing to darken. Is this occurrence related to real world ongoings? Or is there something else going on? You’ll have to watch to find out.

With the space race fully in motion, Serling often addressed the wide-ranging possibilities of what humans might encounter beyond planet Earth. In this episode, he introduces viewers to Arrow One, the first manned flight into space.

Flash forward and the spacecraft has crash-landed on what appears to be a barren planet. Several astronauts are dead, and soon after the remaining astronauts begin to fight. The twist ending aside, this episode raises an obvious and deep question: how might humans behave toward one another if there was little to no expectation that they would be accountable to society ever again?

In one of two episodes to star William Shatner, a husband and wife on a road trip suffer a problem with their car and are forced to stop in a small, unknown town and have it repaired. They decide to grab lunch at a local diner, where each table is equipped with a one-cent fortune machine. Shatner’s character proceeds to play.

He quickly becomes obsessed with the machine’s seemingly accurate answers, and continues to drop in pennies despite his wife’s protests. Yet does the machine really have the ability to understand Shatner’s questions, or is Shatner being duped?

Thus begins a string of four of my favorite episodes – and one that Serling claimed was a favorite of his. Gart Williams is an ad executive in the city who increasingly feels the stresses of a demanding job and a wife bent on riches. On his train commute home, Williams begins to dream of a stop named Willoughby, a utopian town “where a man can live his life full measure.”

This episode was one of Serling’s favorites because it was personal. It dealt explicitly with the kind of work life becoming more common in that era – long hours in a competitive office environment featuring intense mental pressures – and its effects on life at home (Serling worked in television in Hollywood, and eventually retired to upstate New York). But I think there is another angle to this story: perhaps, for some people, imaginary life truly is better than the real thing.

It is a clear and normal day on Maple Street, when suddenly a dark shadow passes over, followed by a loud roar and a bright flash of light. Every house on the block loses power, and every car stops working. As the community speculates on what could have happened, they start to believe it must be aliens attacking Earth. A number of strange things begin to occur, and suddenly every person on the block is accusing the other of being an alien.

This episode, which has been used in classrooms to explore with students ideas like critical thinking and intolerance, closes with another poignant Serling narration:

The tools of conquest do not necessarily come with bombs, and explosions, and fallout. There are weapons that are simply thoughts, attitudes, prejudices, to be found only in the minds of men. For the record, prejudices can kill and suspicion can destroy. And a thoughtless, frightened search for a scapegoat has a fallout all its own for the children and the children yet unborn. And the pity of it is, that these things cannot be confined to the Twilight Zone.

David Ellington is an American citizen touring the countryside in Europe who gets separated from his group and caught in a thunderstorm. Desperate for shelter, he stops in what appears to be a church and begs for help. The inhabitants demand he leaves at once, but a weary and sick Ellington collapses.

As Ellington recovers, he begins to hear howling. He demands to know the source of this noise, threatening that if the inhabitants do not tell him, he will go to the police. For your sake, I won’t describe any more of the story here, but let’s just say the moral I take from this one is that once again, reason loses and evil escapes humanity’s firm grasp.

This is one of four episodes to feature Burgess Meredith, who plays Henry Bemis, a bookworm interested only in reading. This focus draws criticism from both his co-workers and his loved ones, who try to convince Bemis that there is more to life than reading.

While most people focus on this episode’s twist at the end, I think there is a deeper angle at play. Have you ever thought that life would be better if everyone else just disappeared and left you alone to your own devices? That’s precisely what Bemis thought – that is, until he happened to take a brief detour through The Twilight Zone.

This episode represents perhaps Serling’s most direct attack on authoritarianism and censorship. It features Burgess Meredith again, this time as Romney Wordsworth, a religious librarian set to be euthanized because the state has found his work and views “obsolete.”

The episode highlights the dangers of declaring any individual member of society unworthy of basic rights, with Serling flipping the focus from people to the state in his closing narration: Any state, any entity, any ideology that fails to recognize the worth, the dignity, the rights of man, that state is obsolete.

In case you cannot catch this television marathon, The Twilight Zone is streaming on Netflix. And since there are 156 episodes of the original series, those who enjoy the above offerings might also take pleasure in many other episodes. In case you’re looking for a decent starting place, here are ten other episodes I highly recommend: The Eye of the Beholder, Where Is Everybody?, The Shelter, To Serve Man, People Are Alike All Over, The Little People, Nothing in the Dark, A Nice Place to Visit, The Brain Center at Whipple’s, and The Silence.

Enjoy, and have a happy new year!
Posted by Unknown at 7:00 AM