To refute or promote? 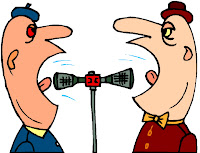 by Michael De Dora
There is an ongoing debate in the secular community about whether secularists ought to concentrate more energy on criticizing bad religious and moral ideas, or promoting positive values. This debate has frustratingly continued since at least early 2009, when I joined the Center for Inquiry, and has no apparent end in sight. While I do not propose to have a solution, I do feel the need to offer a few observations that could help clarify this dispute.
Broadly speaking, the debate features two camps. The first camp believes a robust public discourse includes a good deal of critical discussion on religious belief, considering that faith and dogma so negatively shape social and political life. The second camp thinks that the first focuses too much on disparaging religious belief, and presses for more attention to the advancement of positive values. But, for several reasons, there is no real conflict between the two, even if one is perceived.
It seems to me that a person cannot be against an idea without being for something. When arguing against an idea, one is surely tearing something down. But one is also doing so because he or she values things like science, reason, and secular thinking. Moreover, one can only critique an idea if he or she has a methodology by which to judge that idea. And a critical methodology is meant precisely to help people discard old, untrue ideas and keep building upon the better ones.

It is often difficult, or even impossible, to present an absolutely comprehensive case against someone's position and in favor of your own method and position in the same forum. Billboards, books, blog posts and public events only allow so many words. One does not always get the chance or have the time to fully outline their reasons for critique. But this does not imply that one does not hold good reasons, or thinks that reasons are unimportant. It only suggests a different approach.

For example, Christopher Hitchens is a proud secular humanist. But he spends more time writing and speaking about religious belief than he does clarifying his moral worldview. Is there any reason to doubt his secular humanist credentials because of this? Is his critique of religious belief not helping foster a secular humanist society? Is he really doing harm by increasing the amount of public discourse on religion?
In fact, refuting and promoting are sometimes two different but complementary discussions. This is because refuting religious belief might be about evaluating truth claims while promoting values might be about moral claims. This was the topic of another recent debate in the secular blogosphere, over the claims made by Sam Harris in his book The Moral Landscape: How Science Can Determine Human Values. I do not claim to be a philosopher, but my position is that fact-based discussions of truth and untruth are different in nature than moral discussions of right and wrong -- though, of course, the two can be approached in a similar manner, and are sometimes inextricably tied. This means that concerns about the veracity of religious beliefs are different from concerns about constructing a positive moral framework. Both are important, but they are distinct.

In the end, I believe this is a mistaken debate between people with slightly differing interests. Slightly is the operative word here, for both groups would certainly be considered members of the same team. Many of them even work together at the same secular organization. The critic of religious faith and dogma is on the same side as the promoter of secular moral values. To squabble about whose interests are more important is to lose sight of the underlying problem: the staggering amount of uncritical thinking that is putting society to ruin.
Posted by Unknown at 9:01 AM