“Anything is possible.” No, not really

There are a few phrases that really annoy the hell out of me, one being the oxymoronic “compassionate conservative,” which I will leave for another day. One of the most irritating is the disturbingly commonplace and superficially commonsensical “well, you know, anything is possible.” Now, I understand that this is often said by optimistic people who mean well, and that most of us don’t go around thinking precisely about what we are saying all the time, but that’s the point: perhaps from time to time we should think about what we are saying a bit more carefully.

Those three examples are not picked at random, they illustrate three distinct classes of impossibility recognized by philosophers: the first is an instance of something that is logically impossible; the second is an example of physical impossibility; and the last one is an illustration of contingent impossibility. These three types of impossibility are nested within each other, like this: 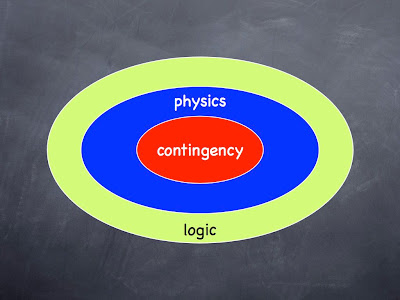 The idea is that some things are contingently impossible, but physically and logically possible. To go back to my examples, the reason it is not possible for me to be in Rome right now is because I happen, contingently, to be in New York. But if I were in Rome, I certainly wouldn’t be violating either the laws of physics or those of logic.

Levitation, on the other hand, falls under a stronger type of impossibility, because it would, in fact, violate the known laws of physics. It still wouldn’t be logically inconsistent, however, because there is no logical contradiction in imagining a universe with different natural laws, one in which levitation is, in fact, possible.

In this hierarchy, then, the strongest type of impossibility is the logical variety: if something is logically impossible (like me being and not being at the same time), it is a fortiori both physically and contingently impossible. There is a caveat here, pointed out by philosophers like Willard Van Orman Quine: we may, from time to time, discover facts about the universe that might make us reformulate our understanding of logic. For instance, while it is impossible (physically and logically) for a macroscopic object to both be and not be, there are quantum-level phenomena that seem to violate this type of logic (think of the dual nature of light, both particle and wave). However, the tricky thing with quantum mechanics (besides the fact that few people really understand it and many more regularly abuse it), is that it is still not at all clear how the equations ought to be interpreted. While the math is indisputable, and so are the empirical results, it may be that light, for instance, is simply something whose nature is so alien to us that the best we can do is to conceptualize it as dual, and is in fact something human thought and language can’t wrap themselves around.

As a philosopher, of course, my favorite type of impossibility is the logical variety, and as an atheist the example I get a particular kick out of is the paradox of omnipotence. The best rendition of it is by J.L. Mackie, in an essay entitled “Evil and Omnipotence” published in Mind back in 1955. It is superb, and still very hard to best. The basic idea is that there seems to be something paradoxical about the very concept of omnipotence, which may indicate that the idea of omnipotency is intrinsically incoherent.

The argument is usually presented as a variant of the following: can an omnipotent god create a mountain that he cannot move? If you answer “yes,” it looks like god can do something that he cannot undo, which means that he is not, after all, omnipotent. If you respond “no” then you are immediately acknowledging a limit to what god can do, so again it turns out that he is not omnipotent. Try getting out of it, you’ll either laugh all the way to your logic class (if you are an atheist) or get a really bad headache (if you are a theist). (The funniest variation of the paradox is due to that immortal philosopher, Homer Simpson: “Could Jesus microwave a burrito so hot that he himself could not eat it?”)

It would seem, then, that an omnipotent god is a logical impossibility. Since logical impossibilities are stronger than physical and contingent impossibilities, it follows that there cannot be such a thing as an omnipotent god. Oops. So the next time someone says something as inane as “anything is possible,” ask them about the paradox of omnipotence: you will kill two birds with one stone, showing both that not anything is possible and that the most common type of god worshiped nowadays is a contradiction in terms. Then go out for a drink to congratulate yourself on a job well done.
Posted by Unknown at 12:01 PM