Podcast Teaser: The Great Atheist Debate over the limits of science

A new word has entered the atheist vocabulary of late: “accommodationist.” It is meant as a derogatory term toward those atheists and assorted rationalists who try to extend a metaphorical olive branch to moderate religionists and find common ground against the real danger, fundamentalism (of any kind, religious or not). To give you an idea of the landscape, I think it is fair to count Richard Dawkins, Jerry Coyne, and PZ Myers among the “purists,” while Eugenie Scott, Michael Shermer and yours truly have been labelled as accommodationists. 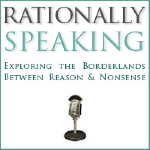 Contrary to what many people think, this isn’t a debate about pragmatic tactics in the culture wars, it is a matter of principle. Few people — possibly not even Dawkins — would disagree that, say, the fight for a true separation of church and state has to include a broad coalition of religious and non-religious groups, partly because the goal is in the interest of both parties, and partly because there simply wouldn’t be hope for just secular groups to prevail, considering that they represent a (sizable) minority of the population.
The Great Atheist debate is a matter of principle because it hinges on the epistemic limits of science. When Dawkins says that science can refute “the God hypothesis,” or Coyne claims that a 900-ft Jesus appearing in London (why London?) would disprove atheism, they are making epistemological assertions that are founded on a naive understanding of philosophy of science (and it is interesting that both of these esteemed colleagues scoff at the very idea that philosophy has anything to contribute to the debate).
The argument on the “accommodationist” side (a term that deliberately sounds like “collaborationist,” presumably to insinuate a negative connotation, a logical fallacy known as poisoning the well) is that there is a distinction between methodological and philosophical naturalism. I first heard this argument from my friend Genie Scott several years ago, and — not having any background in philosophy (at the time I was a scientist) — reacted pretty much like Dawkins and Coyne. But a moment of serious reflection shows that Scott is correct: naturalism is the idea that all there is in the universe is natural phenomena and natural laws, i.e. there is no supernatural. Philosophical naturalism is essentially the atheist’s (eminently reasonable) position, grounded on serious philosophical arguments (e.g., the argument from evil) and informed (but, crucially, not determined) by science — science provides the most reasonable explanation for questions of origins, so it makes sense to accept those instead of fanciful stories about gods and angels that do not amount to explanations at all.
Methodological naturalism is what science does: science cannot investigate the supernatural because the latter — by definition — can be compatible with any given empirical observation, and moreover it simply cannot be experimented upon. But science doesn’t need the stronger philosophical position, it works very nicely by using the methodological (i.e., pragmatic) stance that what it studies likely has a natural explanation, so let’s go and find out if we can.
A common strategy of the “purist” camp is to say that science falsifies specific religious notions, such as Noah’s flood, or that the earth is 6,000 years old. Besides the fact that it is funny for a philosopher to see scientists invoking Popper’s idea of falsificationism (which has been superseded decades ago in philosophy of science), this simply won’t do, for two reasons. First, the claim is that science can reject the God hypothesis, not just a specific version of it. Plenty of Christians do not read the Bible literally, so any “falsification” based on that approach is out the window. But it gets worse: science technically cannot even reject young earth creationism because of an escape clause known in some circles as “last Thursdaysm.” The idea is that, yes, the earth may look like it is billions of years old, and it may look like there are millions of fossils scattered throughout the geological column. But in fact the world was created by god last Thursday (or whenever), and he arranged it this way just to test our faith.
Let us be clear on this: regardless of how many Christians actually subscribe to some version of last Thursdaysm (we don’t know, there are no polls), the example unequivocally shows why science has no business testing supernatural hypotheses: because they are not hypotheses at all, just like supernatural “explanations” do not, in fact, explain anything. They are just elaborate and fanciful admissions of ignorance.
Last Thursdaysm, however, gets into deep theological and philosophical troubles, for what does this sort of divine behavior tell us about the nature of god? Is he a cosmic trickster bent on providing us with the gift of reason only to hurl us into hell if we use it properly? And we are supposed to honor and adore this guy? Notice too that the philosophical counter here gets off the ground by acknowledging the science as background information (i.e., the earth really is much older than 6,000 years), but does not in fact depend crucially on it for its rejoinder (after all, Hume’s and Kant’s arguments against the existence of god were very persuasive before Darwin and Einstein).
So, dear readers and podcast listeners, what do you think of the Great Atheist debate? What about the distinction between science and philosophy that underlies it? What are the epistemic limits of science, and do they somehow constitute a problem for the scientific endeavor?
Posted by Unknown at 11:42 AM