A conversation with Dan Dennett 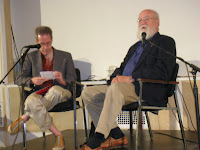 A few days ago I had the opportunity of moderating a conversation with philosopher Daniel Dennett, hosted by the New York Society for Ethical Culture as part of their presentation of two of the “Atheists Tapes” produced by Alive Mind. It was a pleasant and intellectually stimulating afternoon, which reminded me both of why I admire Dennett, and also of the points of disagreement we have on substantial issues in philosophy and humanism.

For instance, we certainly agree that religion is, as Dennett puts it in his book, a natural phenomenon. How exactly it came about, and what the relative contribution of biological and cultural evolution was to its shaping remains a matter of debate and a fertile field of inquiry, but religion in that respect is no different from other peculiar human habits, such as producing music, or engaging in team sports (or war, for that matter).

Dennett is also right on target, I think, on the idea that so-called “free will” is a rather fuzzy concept, and that it certainly does not imply any threat to a mechanistic view of the world. Neither he nor I are in the least impressed by quantum mechanical “explanations” of free will, which don’t explain anything, and which at best would gain us random, not free, will. I highly recommend his Elbow Room for a serious treatment of the matter.

Dan and I begin to diverge on how we see evolutionary theory. His Darwin’s Dangerous Idea is one of the best and most provocative books on the subject, and a must read. But it does give a rather too harsh treatment to the ideas of Stephen Jay Gould and his insistence that natural selection is not the only major mechanism in evolution. Indeed, Dennett from this perspective appears to be a strict classical Darwinist, downplaying or dismissing also some ideas about group selection as proposed most recently by David Sloan Wilson. I tend to be more of a pluralist on both enlarging the scope of selection at multiple levels of biological organization, and in welcoming multiple causal explanations, including non-selective ones, for the bewildering variety of biological phenomena.

Another point of disagreement that emerged during our discussion at the Ethical Culture concerns the so-called New Atheism, which I welcome as a needed vehicle for bringing atheism back to the center of social discourse, but which I also find has a tendency of being a bit too abrasive -- especially in the versions of the British New Atheists Richard Dawkins and Christopher Hitchens (the very fact that these two, plus Dennett and Sam Harris, welcome the label “the Four Horsemen” is a sign of how openly confrontational their attitude is).

In response to a direct question I posed about the New Atheism, Dennett said that he used to think that Dawkins was too far out in his positions, but that recently he (Dennett) has begun to come around to the need for a more aggressive and militant atheism. I don’t buy it, which is why -- again contrary to both Dennett and Dawkins -- I changed my mind about, for example, the wisdom of calling myself a “Bright.” It isn’t that I’m afraid of confrontations (if you have ever seen me debating a creationist, in person or on YouTube, you know what I mean). And I do think that one needs to be, as Dawkins often puts it, intellectually honest and call a spade a spade. But there are different ways of doing it, as a matter of style, not content. In this respect, I think the gentleness of a Carl Sagan, or the empathic frankness of a Robert Ingersoll, are far more effective than the direct charge of stupidity that Dawkins hurls at 90% of the planet.

Regardless, as the public chat with Dennett clearly showed the other day, we all need and can nicely enjoy a conversation on philosophy, science and religion, possibly followed by a good dinner and decent wine. What better way to spend a rainy afternoon in New York City?
Posted by Unknown at 9:48 AM