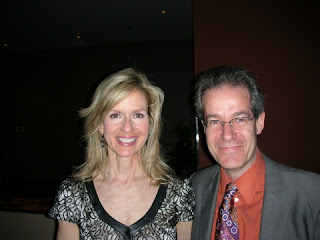 At the 2007 American Atheists convention in Seattle a bunch of independent-minded freethinkers did what best distinguishes them from religious fundamentalists: we discussed our disagreements on whether one of our own champions is right or wrong, and to what extent. I was invited by AA's President Ellen Johnson (photo, with me) to present a lecture by the title “Is Dawkins deluded? On the relationship between science and religion,” in which I critique Richard Dawkins' best-selling and controversial book, “The God Delusion.”

You can find the full lecture on the RationallySpeaking web site, but here is the gist. As I see it, Dawkins makes five main points throughout the book, which is written in his characteristic style blending an uncommon ability to present complex ideas with a thoroughly enjoyable British sense of humor.

The first point (not in order of appearance in the book) is that open criticism of religion should be a normal part of public discourse in any democracy. He gets no disagreement with me on that one. Contrary to what many people seem to think, the First Amendment to the United States Constitution (the one about free speech) doesn't protect people from being offended; on the contrary, it protects people like Dawkins and me if we deem it useful to write or talk in a manner that may be offensive to others. If you don't like it, don't listen to us, change the channel, or click on another link.

Secondly, Dawkins maintains that it is urgent that we raise the public's awareness of religion's dark side. Again, no disagreement here. It should be unacceptable that politicians and other public figures can go on record saying about atheists the sorts of things that few at this point dare say about other minorities – such as blacks or gays. Witness the infamous statement by former President George H.W. Bush: “I don't know that atheists should be considered as citizens, nor should they be considered patriots.” Notice, by the way, that this isn't a matter of statements that are simply offensive (although of course they are), it is a question of attempting to deny to atheists the same sort of Constitutional rights that other Americans enjoy.

Third, Dawkins says that mainstream religious people are complicit in the rise of fundamentalism, because they are reticent to openly criticize the excesses committed in the name of religion – any religion. He also maintains that, at any rate, there is no such thing as a reasonable religion, so we need to pursue “l'infame” (as Voltaire would have put it) in all of its incarnations. Here is where I begin to part ways with Dawkins, albeit only partially. I do agree that belief in the supernatural is irrational no matter what its form, and I also concede that the so-called “silent majority” has been much too silent for much too long. However, it is an elementary logical fallacy to lump every religious belief and position into the same bundle just so that we can have a larger bonfire. On the contrary, we need to engage mainstream religious people to convince them to join forces against intolerance, because it is intolerance that is the clear and present danger. As for being irrational, even irrationality comes in degrees: while it is downright silly – given all we know about the universe – to insist in believing that the earth is 6000 years old, this is simply not the same as to believe in, say, a creator of the universe that made the laws of nature and then retired.

Fourth, Dawkins provocatively labels religious indoctrination, by parents or others, as “child abuse.” My disagreement here is a bit more marked than on the previous point. Yes, I do think that children have their own rights, and that one of these is the right to the best education that parents and society at large can afford to give them. And I agree that a religious education is, essentially, an oxymoron. However, to speak of “child abuse” is clearly an inflammatory and unnecessary exploitation of the word. Yes, in extreme cases – such as Christian Science (talk about an oxymoron!) parents withdrawing medical care from their children – one can in fact talk about abuse. But to claim that 85% of the population willfully abuses their children is simply preposterous, and it does nothing to move civic discourse in the direction we as atheists want it to go.

Lastly, Dawkins claims that what he calls “the God hypothesis” is scientifically refutable, i.e. that science can establish beyond reasonable doubt the non-existence of god, any god. Here, I'm afraid, he is sorely mistaken. Science is a very powerful tool invented by humans to find out about the natural world, but it is grossly ill-equipped to deal with the supernatural, and engages in that task at its own peril. Yes, some kinds of specific religious claims can in fact be tested and rejected on scientific grounds. For example, if your belief in god depends on your belief that there was a worldwide flood 4000 years ago, well science does contradict you beyond reasonable doubt. But that is because you, the religious believer, have made the mistake of moving from metaphysical claims to physical ones, i.e. you positioned yourself squarely on the proper turf of science. Yet, there are a great deal of conceptions of “god” that do not require the believer to make that fatal move. If you think that natural selection is simply one more law of nature established by an intelligent designer, there is absolutely nothing that either Dawkins or any other scientist can do to put that idea to the test. Of course, even that rarefied concept of god would be irrational, for the simple reason that there is absolutely no evidence in its favor, and I maintain that it is in fact irrational to believe anything for which there is no reason or evidence. But such conclusion is a philosophical, not a scientific one, and Dawkins makes the apparent mistake of conflating the two: for him, reason and science are one and the same, in perfect scientistic style.

Or, rather, in perfect Enlightenment style. Indeed, Dawkins expressly claims, in his book, to be “a son of the Enlightenment,” the 19th century philosophy that brought us the first Encyclopedia as well as the French Revolution and the American Constitution. I admire the ideals of the Enlightenment, and I used to take a position very close to Dawkins', when I was younger and a bit more naive. But the fact of the matter is not only that reason is much broader than science (think of philosophy, for example), but that reason alone cannot do the job of cultural change that atheists are really pursuing. To put it as David Hume – the skeptic philosopher who himself embraced the Enlightenment – did: “reason is and ought to be the slave of the passions,” by which he meant that reason alone doesn't provide us with sufficient impetus to care or act about anything, no matter how right our opinions may be. Why did Dawkins write his book to begin with? Because he has a passion for science and reason, and because he passionately feels that religion is a pernicious influence on society. I agree with him, and I'm equally passionate about it. But that doesn't give us license to pretend that science can do more than is within its power, nor to ignore that fact that we will win hearts and minds only with a balanced combination of reason and empathy, not by showing off our scientistic arrogance.

That said, Dawkins' book should be read by anyone seriously interested in atheism, and his arguments ought to be evaluated on their own merits, carefully sifting what is good from what doesn't stand up to scrutiny. Most importantly, he has a right to put forth his opinions in whatever way he feels appropriate without drawing the fire of politically correct “progressive” intellectuals who get squeamish every time religion is put under the microscope of critical evaluation (not to mention, of course, the predictable venom of Christian and other fundamentalists). The Enlightenment may have its limitations, but the First Amendment still stands as one of the highest ethical achievements of humankind.
Posted by Unknown at 12:38 PM