Ah, the sweetness of candy Jesus 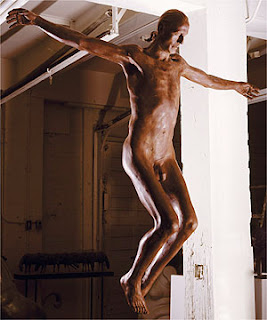 By now you will all have heard about the “controversy” surrounding an anatomically correct statue of Jesus made of chocolate, the latest idiocy from “artist” Cosimo Cavallaro – who previously brought to us a life-sized room painted with mozzarella cheese. Sorry, in my book that ain't art, but a rather cheap sensationalist stunt to gain five minutes of fame for a non-entity.

Nonetheless, the fact that Cavallaro's exhibit at Lab Gallery, inside the Roger Smith Hotel in Manhattan, was canceled out of outrage is positively disturbing. Bill Donohue, of the infamous Catholic League, commented that “My Sweet Lord” (the rather unimaginative title Cavallaro gave to his creation), is “one of the worst assaults on Christian sensibilities ever.” Oh Jeez, I mean, oh shit, God forbid (darn, I've done it again!) we offend Catholic sensibilities!

What Donohue and company just don't seem to understand is that there is no constitutional protection from insult (well, there is, in Iran). Indeed, the US Constitution protects the right to offend, even in poor taste. The only reasonable defense against offense is not to go see the exhibit, or to make a chocolate statue of Cavallaro and give it a ridiculously small penis for all to see. If we are talking about offense, I am personally offended by the very existence of such a bigoted group as the Catholic League. Ergo, they should immediately cease to exist, according to their own logic.

By the way, apparently Cavallaro's idea wasn't even that original, since one can find plenty of Jesus sweets for purchase on the Internet. Try the Jesus large lollipop, for example, which you can buy for only $5, and can be made sugar free for an additional 25% (taking stuff out after having put in to begin with is apparently a costly proposition). Incidentally, when the statue will be dismantled, who is going to eat Jesus' penis? Or are they going to throw away all that good chocolate?
Posted by Unknown at 4:45 PM