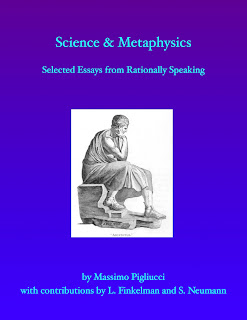 Here comes another collection of selected essays from the Rationally Speaking blog, and I hope you’ll enjoy it. The blog itself has been around since August 2005 (and it was an internet column before that), and at last count my collaborators and I have published 1,119 posts, which received 30,242 comments and generated 2,956,259 page views. Not stratospheric, I know, but not too shabby either.

The point of collections such as this one is to put together (edited and updated, when needed) posts that concern a reasonably well defined set of topics, and that as a group can be seen as a coherent articulation of my (and/or my collaborators’) views about said topics.

This particular set of Rationally Speaking essays is focused on issues at the borderlands between science and metaphysics. Metaphysics, of course, is the branch of philosophy canonized by Aristotle as distinct from physics (and the other sciences), in that it is concerned more with the logical structure of the world than with our empirical findings about it.

These days science and metaphysics are undergoing a somewhat more difficult relationship than in the time of Aristotle. On the one hand we have scientists like Stephen Hawking, Lawrence Krauss and Neil deGrasse Tyson (to name a few) who flat out reject all metaphysics as useless speculation. On the other hand there are metaphysicians within the so-called “analytic” tradition in philosophy who seem convinced that one can arrive at a rational view of the fundamentals of the world while gingerly ignoring science. I fall in neither camp, and am much more sympathetic to what is sometimes referred to as “naturalized metaphysics” (or, more controversially, “scientific metaphysics”). The idea is that one simply cannot do metaphysics without science, but that science itself is insufficient to arrive at a project of unification of our knowledge of the world — conceptual (i.e., philosophical) analysis is also warranted.

The essays collected here, broadly speaking, are rooted in this sensible, middle ground approach to metaphysics. We begin with “pure metaphysics” (a discussion of modal realism and of the doctrine of materialism), move to the metaphysics of logic and mathematics (mathematical Platonism, anyone?), then to the perennial battle between naturalistic and supernaturalistic views of the world, and finally to sections on metaphysics and biology and metaphysics and (fundamental) physics.

Enjoy, and don’t forget to visit rationallyspeaking.org for the latest musings about science, philosophy and their complicated intersections.