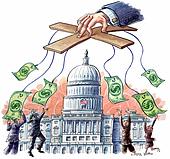 Recently I’ve had a Twitter “discussion” with my friend Michael DeDora (I know, the meaning of the term here is a bit stretched: think of having discussions on Twitter as analogous to being forced to write Haiku poetry. You will never get the Iliad out of it, but that doesn’t mean it’s all garbage). The topic of the discussion was the morality of lobbying, and it was sparked by my posting a link to this article in the New York Times, reporting that — entirely unsurprisingly, and just as entirely objectionably — lobbyists for large banks are “helping” US legislators write laws about bank regulation... [If I have to explain to you why this is a problem, you may as well not bother reading the rest of this post.]

Michael, who is a lobbyist for the Center for Inquiry, retweeted my tweet, adding a “Hey!” in front of it, in clear protest. [To complicate things, I should disclose that I actually helped Michael find his job at CFI, and am very proud of his career there!] An interesting exchange ensued, during which Michael tried to convince me that lobbying is not just a necessary evil (as I readily admitted, in the specific case of non-profit / non-corporate lobbying), but a positive good for our democracy. Here is why I think he is wrong.

[In what follows I will quote Michael’s objections verbatim, followed by my off-Twitter commentary.]

Michael: I think lobbyists/advocates are necessary no matter how “good” the democracy is, unless it is a form of direct democracy.

Well, no. Democracies have existed for a long time without lobbying, and have worked very well, thank you very much. Indeed, institutionalized lobbying is a recent phenomenon, pretty much exported by the United States, and still relatively young in other Western countries. I’m sure it will spread, but I regard this as yet another case of unfortunate American influence on the rest of the planet, not as something that is necessary for a functional democracy. Michael seems to be assuming that without lobbying organizations the American people would have no way of communicating their priorities and choices to their elected representatives. But this is clearly not the case: not only are said representatives elected (ideally, I know) precisely on the basis of what they explicitly say they will do on behalf of their constituents, but the constituents themselves can (and do) pick up phones, computer keyboards and the like and actually let their representatives know what they want or don’t want. Moreover, it is standard practice for elected officials to go back and visit their districts, and even to periodically conduct polls to assess the priorities of their fellow citizens. So, no, lobbying is not the only alternative to direct democracy. [And by the way, I think direct democracy is a horrible idea, just ask Plato.]

Michael: Elected representatives need to be reminded on daily basis what constituents care about, and to hear from experts on those issues.

I have already taken care of the first part of this argument, but the second part seems to me to mischaracterize what a lobbyist is: lobbyists are not just “experts,” they are advocates of a particular point of view. Yes, they may have expertise on a given subject matter, but that expertise is channeled specifically in the service of a pre-determined agenda. Representatives have other ways to get impartial expert advice (to the extent that impartiality is possible on political matters, of course). First off, they have paid staff whose purpose is precisely to provide them with background research on whatever issue they are suppose to be legislating. They can also ask their staff to contact, say, academic experts or organizations (like the National Academy of Sciences) to provide them with the needed perspective. Going to a lobbyist for education is like going to your bank for financial advice. Wanna bet they’ll tell you that their products are the best on the market?

Michael: Ideally citizens would be educated and engaged — your “good” democracy — but they still need guidance, support, representation.

Right, which is why we have, ahem, representatives who are supposed to also lead our country in better directions (whether they do it or not is, of course, another matter). Of course, Michael is thinking largely of his own type of activity with CFI, which I do think is — unfortunately — necessary. But recall that the exchange began with an article about corporate lobbying on behalf of banks. Do banks (or any other corporation or industry) really need “guidance, support, representation”? I think not.

Michael: American democracy is enormous; there are many groups which are underrepresented in the political process for whatever reasons.

This is a good point, though again, hard to imagine banks as qualifying here. More broadly, my objection to lobbying is based on the reality that groups who can pay for it get privileged access to legislators. The groups Michael is concerned about, ironically, are the least likely to get such access, because they typically have the smallest budgets. Wanna compare what CFI spends on his activities in Washington with what, say, the oil industry does? Besides, let’s think about exactly what it means for groups to be underrepresented in the political process. People of different genders, ethnicities, religious affiliations, political ideologies, and so forth, all get precisely one vote when it comes to electing representatives. Of course this does not automatically translate into equal representation, but that’s because of problems with the electoral process (e.g., disenfranchisement of minorities and the poor), lack of education, and so forth. Those are certainly problems worth addressing, as they are structural and truly fundamental to a viable democracy, but they have little to do with lobbying per se.

That’s right, that is precisely how I see them. And no, groups do not equate to constituents, but to particular types of constituents, usually with deep pockets and a resulting unbalanced access to Congress (see above).

Indeed, as they should. But my objection isn’t to social advocacy in general, or organizing in support of social causes, and so on. It is specifically about lobbying, as defined above.

Michael: Define “the rest of the world.” There are activists/lobbyists all over Europe.

Yes, there are. But first off, there is a difference — again — between activists and lobbyists. Second, even a document [download] that Michael himself shared during the course of our Twitter conversation makes my point. The report in question essentially says that the only countries were there are registered (meaning: officially recognized as part of the way the government operates) lobbyists in the Western world are the US, Canada, and Germany. In all other countries, of course, there are people and organizations that try to influence the legislative process, but do not have regulated privileged access to the legislators. Indeed, the report mentions the case of the UK, which I think is one from which the US could learn: “The UK, on the other hand, has opted to regulate the lobbied rather than the lobbyists.” In other words, the focus should be on regulating the legislators and prevent privileged access to them by any group, an approach that hardly diminishes people’s rights to organize in support of their causes.

Indeed we do. Which is why I support CFI but not JPMorgan Chase. Still, it is far too easy for bank (or any other corporation / industry) lobbyists to make the argument that they too are concerned with issues. And being non-profit is hardly a guarantee, as it is all too easy to set up front organizations, like so many Washington “think tanks,” that end up doing the same sort of job that corporate lobbyists do. Once we buy into the idea of legalized privileged access, all bets are off, as far as I’m concerned, and democracy suffers. (I don’t think anyone can reasonably argue that current American democracy is not one of the worst in history, with an unprecedented degree of decoupling between what constituents want and what their alleged representatives actually do. And yes, lobbying is a major factor in this abysmal state of affairs — that and the legalized bribery that is the system of private contributions to re-election campaigns.)

Michael: If anything, it makes the situation worse. By not recognizing and regulating, there is more corruption happening.

Here Michael was responding to my observation that most other Western countries do not recognize lobbyists (see above). Well, this is of course an empirical question, and I’ll await pertinent empirical evidence to settle it. But note one thing: in Italy (for instance) corporations do not have special access nor can they give money to politicians to help elect them. This doesn’t mean that the Italian political system is free from corruption (far from it!). But it does mean that if you are caught engaging in that sort of activity you end up in jail. In the US, by contrast, not only is that sort of blatant bribery legal, but the Supreme Court has even magnified the problem recently under the Constitutional right of freedom of speech! (Yes, I know, strictly speaking campaign contributions are a separate issue from lobbying, though in reality the two are highly connected.)

My exchange with Michael ended up on the positive note that we’ll both look into empirical evidence for specific claims and revisit the topic. As one of my followers, Josh Bunting, ironically put it: “I was hoping this would end with ‘USA! USA! USA!’ instead of ‘I'll do some research and get back to you.’” How disappointing indeed.

[Note: I have invited Michael to respond to this post, if he feels so inclined. I hope he will, it’s an important conversation to have, particularly with someone like him, who has actual experience of lobbying from the inside.]
Posted by Unknown at 7:00 AM