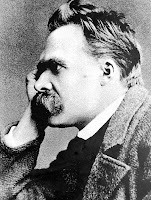 State is the name of the coldest of cold monsters.
— Nietzsche, Thus Spoke Zarathustra

How should a political innovation be sufficient to make men once and for all into happy inhabitants of the earth?
— Nietzsche, Schopenhauer as Educator

We moderns still seek our salvation in the State. Hasn’t society increasingly, even within the brief span of our own lifetimes, turned to government not only to solve our practical problems and material needs, but to solve the problem of life — which is, arguably, essentially the problem of values? Do we not continually ask government, however inchoately, to be the redeemer of life for us? And not only for our collective life together, but for our individual lives, too? We still seek, primarily, collective sources of redemption, herd animal sources, as Nietzsche would put it, instead of trying to create for ourselves transhuman (with a lowercase “t”) solutions. We still seek what I call “Humanimal” and, in many cases, just animal solutions for Humanimal ends only. [1]

Don’t get me wrong: working with and within the political system is still important and essential. And as a “secular liberal,” I value and work in my own modest way toward goods like marriage equality and women’s reproductive rights.

But the political system is also important because creating conditions that allow, or even encourage, otherwise disadvantaged or underprivileged individuals to engage in life-redeeming activities not only enables them to work on transforming the Humanimal into the transhuman, but establishes favorable conditions for the elevation of the species as a whole. To put it in supply-side economics-speak: a rising (spiritual) tide can lift all boats. Nietzsche certainly wasn’t an optimist; his ethos was decidedly individualistic, and infamously anti-democratic. And I’m not saying that having individuals here and there actually succeed in this type of self-realization will automatically or necessarily lift the general culture; but they can certainly serve as exemplars; their lives constitute a sort of proof of principle from which others can derive hope and maybe even the necessary motivation.

Whether one has a naturalistic worldview or a religious worldview, one still eventually confronts the problem of values. The religious believer turns primarily to scripture and tradition, but she still has to divine for herself, so to speak, whatever meaning might apply to her life. We all share some general values, of course: e.g., being alive is better than being dead; do as you would be done by; etc. But both the believer and the nonbeliever must discover and choose values that apply to their unique temperament and circumstances.

Am I just confusing politics and spirituality? No. The history of the State has been viewed at times as an arena where the opposing, but certainly not mutually-exclusive, forces of Nature and Culture clash. So what is the difference between Nature and Culture? Money-making, career-climbing, progeny-producing, political-plotting — all are still Nature and not Culture. But it is through the pursuit of values that we create Culture; or rather, it is through the pursuit of values that we can create an intentional Culture. That is, we can approach the creation of Culture the way an artist approaches his subject, adopting an intentional perspective, picking and choosing the various elements (i.e., “values”) that ultimately represent and incarnate his vision — as opposed to Culture simply being whatever happens. My own paradigm for the type of artist that best exemplifies the approach to life that is needed is the poet. Not just any poet, of course, but a specific kind of poet and poetry.

It goes without saying that poetry, and art in general, is a means of self-expression. But poetry tends to be more intimate, or at least more specific, in this regard than other modes of artistic expression. A painter can certainly convey somewhat discrete moods through his choice of pigments, and a musician more so through the choice of his notes, but a poet possesses the precision of language — at least as precise as language can be. And though I don’t have space to discuss it here, language may even be necessary for thought itself. A poet not only communicates distinct feelings through a combination of evocative imagery and the “music” of the poem (i.e., accent, duration, meter, rhyme, assonance, etc.), but can utilize words that are able to capture an experience in a way that more abstract media like color and sound cannot. Therefore, his expression exhibits more of an explicit intellectual component — a cognitive scaffolding, if you will.

Self-expression in poetry has come in many flavors throughout history, too. Subjective poetry gives priority to the thoughts and feelings relating to the inner experiences of the poet as a person, whereas the objective mode reveals a concern with things external to the poet. But even here there is an element of the personal: we still get a sense of the poet’s values because of the objects he chooses to honor with his attention and care. The archetype for this latter style of poetry might be Rainer Maria Rilke in his 1907 collection Neue Gedichte.

Poetry is more than just self-expression, it is also a means to self-knowledge. For as long as human beings have been reflecting on their inner world, some have realized that we don’t know what we’re going to think next until the thought itself arises in our consciousness. The human mind sometimes seems more like a Magic 8-Ball than a searchable database. As Nietzsche succinctly puts it:

I shall never tire of emphasizing a small terse fact, which these superstitious minds hate to concede — namely, that a thought comes when “it” wishes, and not when “I” wish...
— Beyond Good and Evil

The act of writing, and of writing poetry in particular, can be one of the most effective means to self-knowledge because writing, whether sitting down with pen in hand or finger tips on keys, is an exercise in preparation and concentration; and because poetry has an air of ancient sacredness throughout the history of our species. As the late Mexican poet Octavio Paz observed, wherever there has been a group of humans, there has been poetry — i.e., song, myth-making, etc. And consider the following thoughts from the late poet Denise Levertov:

But the condition of being a poet is that periodically such a cross section, or constellation, of experiences demands, or wakes in him this demand: the poem. The beginning of the fulfillment of this demand is to contemplate, to meditate. ... To contemplate comes from ‘templum, temple, a place, a space for observation, marked out by the augur.’ It means, not simply to observe, to regard, but to do these things in the presence of a god.
— The Poet in the World

I doubt that most modern writers have this sense of the divine when they write, of course. I hold to a naturalistic worldview myself, so I don’t believe in anything supernatural — no ghosts, gremlins or gods — yet I still share her fundamental appreciation of mystery and the pressure of a certain gravitas, as well as a sense of puzzlement at the whole process. But what we need to realize, and what we all too often fail to, is that everything we think comes to us without any conscious control. In fact, the whole concept of “conscious control” is essentially an oxymoron. This doesn’t mean that what we have come to believe simply comes to us ready-made, as it were, a gift from a god or some mystical inner homunculus. But when we sit down to write, we can compose ourselves in such a way as to make more efficient or effective use of this means to self-knowledge. And the poet, by working on his experiences in such a way, serves as a lighthouse for others who are embryonically yet doggedly groping their way out of the ocean of existential chaos. As Levertov says in her notes:

Years ago, I copied out this statement by Ibsen in a letter: “The task of the poet is to make clear to himself, and thereby to others, the temporal and eternal questions.”

It’s obvious not every working poet is engaged, even subconsciously, in this task. But those who have the talent and inclination to write poetry should be encouraged to do so; and even those poets who aren’t cognizant of this aspect of their vocation can be beneficial if we read them correctly. Though I believe that the poet, or at least the poet’s approach to his experience and existence, is the best paradigm for what I’m after (for myself and for society), I also believe it is necessary to create the requisite conditions for the emergence of individuals so inclined; and it is to this extent that I wholeheartedly endorse (some of) the actions of the cold monster of the State.

In the 2008 book, Outliers, Malcolm Gladwell argues that those most successful in life didn’t get that way through skill and willpower alone. On the contrary, if you look at their lives closely you realize that they had some key “helpers” and serendipitous events along the way. One here recalls Obama’s whole “you didn’t build that” hullabaloo leading up to the 2011 election. But Gladwell’s claim is irrefutable: one can’t reach the top unless one has T.O.P.; that is, unless one possesses a Talent and has the Opportunity to Practice it, and the opportunity to “make it” after one has practiced sufficiently. Again, it is in this sense that I see the cold monster of the State as a valuable monster.

[1] Those familiar with Nietzsche will recognize that I’m talking about a certain interpretation of his concept of the Übermensch, or the “Overhuman”; which, in turn, echoes Emerson’s “Oversoul.” My use of this concept could be considered roughly an amalgam of the two; and, for lack of a better term, I’m employing the word “transhuman.” And what I mean by “Humanimal” is simply a certain species of exceptionally intelligent primate with the capacity for language, technology, and myth-making. That is, we modern humans, H. sapiens.