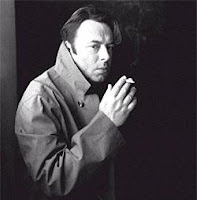 As you all know, Christopher Hitchens has recently passed away after a valiant (and very public) struggle against cancer. Most of the commentaries and obituaries were positive, and many of my fellow atheists and freethinkers seem to genuinely admire the man. I have always been puzzled by why, exactly, this is so.

Yes, he was an atheist. Yes, he wrote eloquently. But that's about it. He was also personally abusive (particularly, it appears, toward fellow writers), misogynist, obnoxiously in your face about his beliefs (or lack thereof), and spectacularly inconsistent (and incredibly often wrong) about his political positions.

So here is my admittedly contrarian collection of commentaries on Hitch, in the hope that we can come up with a more balanced view of the man and begin a thoughtful discussion about just how much good or bad he has done to atheism, freethought, and political discourse.

* Regarding Christopher, by Katha Pollitt (The Nation)

* When Hitch was wrong he was disastrously wrong, by Alex Pareene (Salon)

* The other Christopher Hitchens, by Kevin Drum (Mother Jones)

* Christopher Hitchens and the protocol for public figure deaths, by Glenn Greenwald (Salon)

* More Paranoid Fantasies on the Right... or Why Christopher Hitchens Needs to Drink Less, by Brian Leiter (Leiter Reports)

* Christopher Hitchens’ unforgivable mistake, by John Cook (Gawker)
Posted by Unknown at 7:00 AM