What to make of the “European problem” 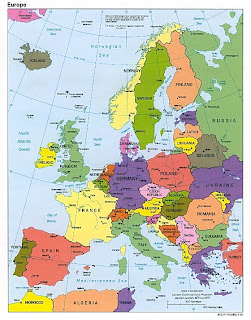 There has been much talk of late about the “failure” of the European system, with predictable and hardly repressed glee on the part of libertarians and right wingers alike to the effect that the financial turmoil across the Pond clearly and finally shows that the social-democratic approach to capitalism is bound to fail. Actually, that is precisely not the lesson to be learned from what has been happening lately. In fact, quite the opposite.

To begin with, of course, even if the European system is in trouble (and it surely is), there ain’t much to snicker about on this side of the Pond either. The US financial-political system is still going through a quasi-depression from which it is hard to see when it will recover, and as recently as three years ago it single handedly caused a worldwide financial collapse from which the rest of the planet is still reeling. So, please, my American friends, stop the patting of your own backs, because it is richly underserved.

Moreover, while in terms of the UN’s Human Development Index, the US ranks a (healthy, to be sure) #6, this is below Australia, Norway, Netherlands, Ireland and Canada (3 out of 6 of which are European countries), and slightly above New Zealand, Finland, Iceland, Switzerland, Luxembourg, Denmark, France, Sweden, and Spain (all except the first, European countries, though not all part of the EU). In terms of income equality (measured for instance by the Gini coefficient), the lowest disparity is found in Denmark, Japan, Sweden, the Czech Republic, Norway, Slovakia, Bosnia, Hungary, Finland, Ukraine, Germany, Slovenia, Croatia, Austria and Bulgaria (again, all European, except for the second one), while you have to go all the way down to #72 — right between Turkmenistan and Turkey — to find the good old US of A. Not much to brag about.

Anyway, back to the European crisis. It is most certainly not caused by “socialism,” partly because no EU country is purely socialistic, as difficult as this is for much of the American public to understand. European countries all have variants of the same system that the US has adopted (pace much right wing rhetoric): a social-democracy where a capitalistic system is kept in check by regulations and where there is a number of social nets in place.

No, the reason why Europe is in trouble is because it is not politically integrated. Europeans have known this for a long time, of course, but it is becoming painfully clear that one cannot have a common currency if there isn’t also a common economic policy, and one cannot have the latter without political integration. Of course, the creation of the Euro zone back in 1999 was supposed to be an important step toward political integration within the EU, a project that goes back at least to Giuseppe Mazzini’s “Giovine Europa” (link in Italian) movement established in 1834.

But two things happened: too many countries joined the EU too quickly, suddenly bringing in too much political and cultural disagreement (not to mention economic difficulties), largely from Eastern Europe. And the European Parliament has simply never been given sufficient supra-national authority to be able to establish coherent lines of political and economic action. In other words, Europe risks failure not because “the European way” doesn’t work, but because the European way hasn’t been pursued far enough quickly enough. The choice the EU countries now face is either to reverse what they have done over the past dozen years and go back to a loosely integrated EU, or to accelerate things forward as they should have done when Mazzini first envisioned it. I hope for the latter, but I fear the former.

This insanity of having a Union without sufficient integration is, of course, not limited to Europe alone. Look no further than the United States, where citizen’s quality of life, economic and job prospects, education, health care and the like are dramatically different depending on whether one happens to live in Alabama or Massachusetts, to take just two of the obvious examples. Indeed, it is often the case that you hear that the State of, say, Alabama, competes with the state of, say, Georgia, to lure business away, and does so by loosening regulations and/or by giving said business even more tax breaks than it already enjoys. This idiotic internecine game can only have one outcome: a rush to the lowest possible denominator in terms of business taxes, environmental and labor regulations, workers’ compensations, and the like. Everybody loses except large corporations that can play States against each other for their own greed.

Of course, in the US this situation is somewhat mitigated by the presence of a Federal government with much stronger powers than the European Parliament (which is, of course, precisely what Republicans — in the pockets of big industry — desperately want to weaken). And that is what both the US and Europe can learn from all this: on the one hand, America’s fixation with “States' rights” is quaint and little more than an excuse to cave in to the demands of large corporations, leading to gross inequality for American citizens who happen to live in different states; on the other hand, Europe’s inability to make the final leap into full integration is exactly what has caused the current debacle to begin with. If only we truly had the United States of America and the United States of Europe both American and European citizens would be much better off.
Posted by Unknown at 9:01 AM