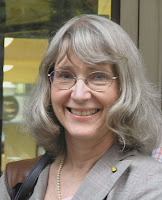 Very soon Julia and I will have our first ever returning guest on the Rationally Speaking podcast: National Center for Science Education’s executive director Eugenie Scott! Genie will be in New York on Sunday, October 23rd, to give a talk to New York City Skeptics on the topic of “Denialism of Climate Change and Evolution.”

We will ask Genie the extent to which the (obviously derogatory) term “denialism,” famously used by New Yorker writer Michael Specter in the title of his book about crazy beliefs in America, should be applied and by what criteria. In the case of climate change, of course, several notable skeptics have been, well, skeptical of the notion, including Michael Shermer (who has since changed his mind), Penn & Teller (who have since softened their stance), and James Randi (who I have criticized openly).

The second episode of the podcast will be about a mounting degree of “neuro-skepticism,” i.e. skepticism about the many claims being made by neuroscientists based on fMRI studies. We have tackled a narrow portion of the issue in our interview with Cordelia Fine about neurosexism, the tendency to unduly extrapolate from small numbers of methodologically questionable studies to grand conclusions that just happen to confirm entrenched cultural notions about the differences between men and women.

More recently, an interesting article in Slate by Ron Rosenbaum broadens the criticism by reviewing a number of pop-science books about increasingly bolder claims by neuroscientists, as well as the ever more widespread criticism of such claims. Clearly fMRI-based neuroscience is not pseudoscience, but even mainstream science has made unwarranted and exaggerated claims before (think of studies “demonstrating” the racial inferiority of certain ethnic groups, for instance), sometimes with dire consequences for the rest of us. So it makes sense to take a closer look at what is being said in this area and on what bases.
Posted by Unknown at 9:45 AM