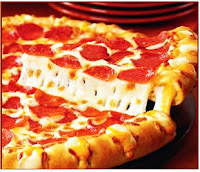 Recently a friend and I ordered take-out for dinner. My friend, a vegetarian, requested plain pizza. When the food arrived, we discovered the restaurant had accidentally given her a pepperoni pie. So she picked off all the pepperoni slices and threw them away, eating the pizza without them.

And in my experience, most vegetarians would do the same. It's always seemed totally illogical to me -- at least, if your reason for being vegetarian is to avoid hurting animals. (I know that's not the rationale used by all vegetarians; some eschew meat for health or religious reasons, but for the purposes of this post, I'm only referring to the "don't-want-to-hurt-animals" vegetarians.) Given the mistake by the restaurant, which wasn't her fault and which is already a done deal, how are the animals any better off if their meat gets thrown in the trash instead of eaten by my friend?

But I think this incident is a great case study in a specific flavor of irrationality: people adopt a general behavioral rule, or "heuristic," that works for most cases, but then they stick to it even in those particular cases where it doesn't apply. The reasoning here seems to go something like this: Eating animals causes suffering, and I don't want to cause suffering, therefore my heuristic is that I shouldn't eat animals. But then they stick to the heuristic even when it doesn't apply -- when eating animals doesn't cause suffering.

A related case arose in a Slate article this week by Christopher Cox arguing that there's no reason for vegetarians to avoid oysters, since oysters have no central nervous system and, therefore, almost certainly can't feel pain. As the author acknowledges, this reasoning probably won't sway many vegetarians, most of whom seem to think, "Vegetarian means not eating animals, oysters are technically animals, therefore I can't eat oysters."

And not-eating-animals is a fine heuristic in general if you want to avoid causing pain, because, almost without exception, animals do feel pain. But if there is an exception -- like oysters, it seems -- then there's no reason to stick to your heuristic. Valuing the label "vegetarian" rather than the logic behind the label makes your vegetarianism seem more like a matter of remaining pure than of avoiding harm. I like how Cox phrased it: "The main argument of Animal Liberation is that discriminating against nonhuman animals is indefensible because it makes irrelevant category distinctions—pain cuts across species barriers. But to loop oysters into a dietary taboo simply because we've labeled them animals is to make just such a faulty distinction."

There's one more kind of sticky heuristic that I often notice cropping up in discussions about vegetarianism: the rule that associates ethical behavior with self-sacrifice. I can understand where the association comes from -- it's certainly true that helping others often entails sacrifices. For example, if I want to give money to charity or volunteer at a soup kitchen, I have to sacrifice money or time that I could have spent on myself. And it's also true that when people benefit from a harmful behavior, they're often tempted to come up with dubious justifications for why it's not unethical, so that they don't have to endure the sacrifice of giving it up.

So in general, the self-sacrifice=ethical, self-enriching=unethical heuristic is not a terrible one. But sometimes it just clearly doesn't apply. By forgoing the pepperoni, my friend isn't helping anyone or anything, so to admire that decision amounts to admiring self-sacrifice for its own sake.

And in those rare instances in which I've seen a vegan friend of mine eat, say, cheese that was accidentally put on his pasta in a restaurant, people tend to gleefully pounce on him: "Aha! So you're cheating?" Even when he explains that there's no point in depriving himself if the cheese will otherwise go to waste, other people's reaction is usually, "Oh come on, you're just making excuses because you want to be able to eat it!"

One of the interesting features of evolution is that it often produces "good enough" solutions, rules that are imperfect but that work well enough for us to get by, and that therefore stick around. And that's exactly what heuristics are -- time-saving rules of thumb that save us the trouble of carefully considering each new situation we find ourselves in. They're "good enough" to give us the right outcome most of the time. But that doesn't mean we can't do better.
Posted by Julia Galef at 6:04 PM