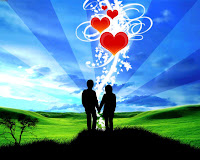 I want to talk about love. But in order to do that, I have to first talk about strep throat.

If you have certain symptoms, like a sore throat and fever, you can guess that you might have strep. And you'll either be right or wrong; either the streptococcus bacteria are present in your body or they're not, and luckily you can go to a doctor to get a strep culture and find out the answer.

Now let's look at another health problem. (I promise I'll get to love eventually.) You can be diagnosed with "Narcissistic Personality Disorder" (NPD) if you meet at least five of a list of criteria specified by the American Psychiatric Association, including "requires excessive admiration," "lacks empathy," "shows arrogant, haughty behaviors," and so on. In other words, NPD is the name that we give to a loose cluster of related traits. With strep, your symptoms suggest the presence of the underlying condition; with NPD, your symptoms are the condition.

The reason all this is relevant to love is that I think most people consider love to be analogous to strep throat. People observe their symptoms -- attraction, obsession, dependence, contentment, admiration, and so on -- and wonder whether they are "really" in love, the same way you might observe symptoms like a sore throat and fever and wonder whether you really have a streptococcus infection. Unfortunately there's no conclusive test for whether you're in love the way there is for strep, but many people are still convinced that there is a right answer even if they can't be sure of what it is -- sort of like an invisible Love switch that's either flipped to ON or OFF.

I think this is all fundamentally misguided. Instead, I'd argue that love is actually more analogous to NPD: it's a word we use to refer to some collection of properties. "Love" isn't the underlying condition of which those properties are symptoms, as with strep; "love" is the name we give to those properties, as with NPD.

(You might be tempted to ask how I can claim love isn't a distinct underlying condition, but I think the burden of proof is on those who claim it is. We all agree on the existence of the feelings of attraction, obsession, dependence, and so on, but to posit the existence of an additional underlying property causing those feelings is to add a hypothesis with no explanatory power.)

How did the American Psychiatric Association pick the particular criteria required for an NPD diagnosis? Partly, the reason is that those traits tend to appear in combination with each other (if you "lack empathy," you're more likely than the average person to also "show arrogant, haughty behaviors"). But picking that particular list of traits and picking "five" as the magic number needed for a diagnosis was really somewhat arbitrary; we just needed some cutoff to standardize our use of the word.

Of course, there is no official checklist specifying which feelings need to be present in order for something to qualify as "love." People use the word in vastly different ways, even within the context of romantic love. Some people might use it to refer to a feeling that other people would instead describe as a crush or an infatuation. Some people would use the word love to describe a feeling that other people would call possessiveness (i.e., "That's not love because he doesn't care whether she's happy, he just wants to control her"). And some people might use the word love where others would say "No, that's not love -- that's codependence." Given the wildly contradictory "checklists" we are all carrying around in our heads, it's no wonder that most disagreements over "Is this love?" boil down to people using different definitions of the word.

If this line of reasoning is starting to sound familiar, it should. My previous post discussed how different people use totally different criteria for deciding what counts as art, and that when people disagree about whether a particular object "is art," they're really just arguing about the definition of the word. For any given case, you can usually find definitions of art that would include your case, as well as definitions that would exclude it. And the same is true with the question "Is this love?"

But if you're wondering whether you're in love, and someone shrugs and says, "Depends how you define love," that probably won't feel like an answer. I suspect that's because "Is this love?" is really a disguised query just like "Is this art?": people associate various characteristics with the idea of being in love -- i.e., love lasts forever, or love is the ultimate emotion, or anything is worth sacrificing in the name of love -- so what they're really wondering is whether their situation shares those characteristics. So, "Is this love?" could be a way of asking "Is what I'm feeling going to last?" or "Would it be possible for me to be happier in another relationship?" And of course, those are important questions. But you're not getting any closer to answering them by deciding whether to affix the label "love" to what you're experiencing.

(Does all this make it sound like I "don't believe" in love? I sure hope not, because judging from the movies, the girl who "doesn't believe in love" is inevitably forced to admit the error of her ways after enduring a brutally cheesy montage involving snowball fights, paddleboating and/or impromptu karaoke. So, please: don't tell Hollywood I said this.)
Posted by Julia Galef at 4:05 PM