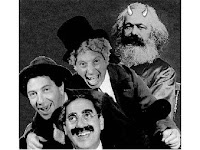 Last night I had a strange experience: I was having dinner in Manhattan, near New York University, surrounded by a group of pleasant and smart people, who happened to be Marxists! It was a nice evening, following a panel discussion at NYU on morality without gods. Still, I couldn’t help the feeling of having been thrown back to my high school days (circa 1977), when people were using terms like “means of production” and “oppression of the workers” with genuine conviction and equal obliviousness to the subtleties of actual socio-economic and political situations.

What I thought I was going to hear from my Marxist companions was something along the lines that Marx’s analysis of class struggle and of the foundations of capitalism was still largely correct, and in fact even relevant to the recent collapse of the worldwide financial system unleashed by the most unbridled (as in unregulated) form of capitalism the world has seen since the era of the aptly named robber barons. That, I think, is actually a defensible position, as much as I don’t believe for a second that Marx’s solution will ever work in any real human society. (My take is that both extreme socialism and extreme capitalism make the same mistake, albeit for symmetrical reasons: they ignore fundamental aspects of human nature. Capitalism puts too much emphasis on self-interest, dismissing the fact that we are social animals with strong cooperative instincts; Socialism errs on the other side, proposing an ant-like society where individualism is progressively squeezed out of the human experience.)

If one actually reads Marx’s The Communist Manifesto, one can hardly disagree with most of his theses. That a key to human history is the economic struggle among classes is true, though my view of history does not admit of a one-cause-fits-all sort of explanation. That a more just society would be created by a fairer redistribution of wealth and especially of the control of “the means of production” is also true unless your definition of “justice” is that (economic) might makes right. And that people’s understanding of their own condition is largely shaped by a system that wishes to perpetuate itself despite its flagrant injustice is also something I don’t dispute.

But my Marxist dinner companions really stunned me when they claimed that Stalin “wasn’t all that bad,” and that “Mao was even better.” Come again? Let’s start with Stalin. His radical policies and pursuit of power killed millions through famine, and that was just the beginning. His regime was one of the most violently repressive in human history, with again millions of people exiled to labor camps or simply eliminated, and entire ethnic groups “resettled” because they were not to his liking. Oh, and while Stalin gets a lot of credit for resisting the Nazi invasion, thereby helping to turn the tide against Hitler during World War II, let us not forget that he also pushed the Molotov-Ribbentrop pact, which paved the way for Hitler’s invasion of Poland, and thus the onset of the war. My Marxist friends quibbled on exactly how many millions were killed (to me, one million is one too many), and claimed that Stalin’s was the first experiment in applied communism, and he had to make up stuff as he went. Well, let me declare the first experiment such a total and abject failure that I really don’t think we should attempt a second one.

But of course many other such “experiments” were carried out during the 20th century, one of the most cruel being Mao’s. Far from me to be able to offer an in-depth analysis of Maoism (or Stalinism, for that matter) here. But let us consider some examples of what the great leader of communist China did. Mao admitted to the execution of about 700,000 people just in the 1949-53 period, justified, in his mind, because of the necessity of consolidating power. The real number is more likely to be somewhere between 2.5 and 5 million. Moreover, another 1.5 million Chinese were sent to labor camps to be “reformed.” During the so-called “great leap forward,” Mao’s second five-year plan that began in 1958, his policies resulted in widespread famine that killed tens of millions of people. The exact numbers are in dispute, depending on the method used to calculate the deaths. A widely accepted figure is of 20 million, though other estimates take that to be a conservative number, with a range going all the way to the mind-boggling figure of 72 million. Again, if this is the hallmark of success, I’d hate to see a failure.

Why is it that otherwise intelligent, nice people, clearly concerned with justice in the world, can still whole-heartedly claim that communism is a good idea? I suspect it is for very similar reasons to why Christians (just to pick another random group of reality-challenged people) can read the Old Testament and seriously claim that all those instances of god commanding his people to slaughter, rape and pillage “in his name” are really quotes taken out of context. In what context, pray, does that sort of injunction become morally acceptable? The problem, in other words, is the uniquely human penchant for adopting an ideological position and then sticking to it, reality be damned.

As my favorite Marx, Groucho, aptly said (ironically, while talking about matters of economics in the masterpiece movie Duck Soup): “A child of five would understand this. Send someone to fetch a child of five.” That is not that different from what I wanted to scream at several points during last night’s dinner. Luckily, the neo-Marxist is one club I simply cannot join, on the grounds that they really wouldn't allow someone like me to be one of their members.
Posted by Unknown at 12:44 PM