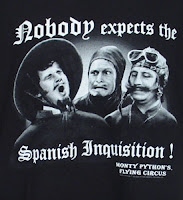 The Pope has left New York, and I celebrated the event the other night by going to see Voltaire’s “Candide” (in the fantastic musical adaptation by Leonard Bernstein). Considering that the French Enlightenment philosopher was famous as a harsh critic of organized religion, and that Pope Ratzinger has had the balls of claiming that “the Enlightenment is of Christian origin,” there seemed to be a delicious irony to the weekend.

“When we hear news we should always wait for the sacrament of confirmation.” (Voltaire)

Indeed, Voltaire -- who was a deist, not an atheist -- got so pissed at religious authorities that he began to sign his letters “Ecrasez l’Infame” (let us crush the infamous), referring to the Church of Rome, currently guided by Ratzinger. As is well known, the latter was until a few years ago the Prefect of the Congregation for the Doctrine of the Faith, formerly known as the Inquisition, the very same folks that brought us the burning of Giordano Bruno and the trial of Galileo (though they also inspired the immortal Monty Python skit claiming that “nobody expects the Spanish Inquisition”).

“Think for yourselves and let others enjoy the privilege to do so too.” (Voltaire)

Ratzinger is a conservative Pope by the standards of the last half century or so, who utters much nonsense, as when he defended the “importance of prayer in the face of the activism and the growing secularism of many Christians engaged in charitable work.” In other words, to believe blindly is much more commendable than actually rolling up one’s sleeves and doing something to improve humanity’s lot.

“I disapprove of what you say, but I will defend to the death your right to say it.” (Voltaire)

Pope Benedict made a big show during his visit in the US of looking contrite about the prolonged scandal centering on sexual abuses perpetrated by members of his clergy. But I wonder how many Americans know that he also wrote a letter to Catholic bishops on the subject, claiming that any Church investigation on this and similar matters is to be considered a pontifical secret, and that anyone revealing any detail of it will be excommunicated (which, if you are a Catholic, means eternal damnation in Hell). Sounds to me like his “Holiness” has something to hide.

Ratzinger has made a major point of his efforts to combat “relativism” and “secularism,” terms that he curiously seems to use almost interchangeably. The Pope has complained of a “dictatorship of relativism,” which is actually an oxymoron, given that relativism is the (bad) idea that all opinions are of equal weight, the very opposite of a dictatorship (the Pope, incidentally, is technically a dictator within his own State).

“Doubt is not a pleasant condition, but certainty is absurd.” (Voltaire)

In a rare display of philosophical ignorance, Benedict actually attributed modern relativism to Kant, because the latter questioned the absolute powers of reason. But there is a huge difference between acknowledging the limits of human reason and rejecting reason altogether. Indeed, Kant is famous for having attempted to establish morality on reason rather than faith, despite being a rather strict Christian himself. Ratzinger has said idiotic things like “Christianity [is] the religion according to reason,” while at the same time rejecting Kant’s project of bringing back reason in our moral discourse.

I’m just glad that I spent my time enjoying Candide rather than going to pay homage to Ratzinger at Yankee Stadium. Ecrasez l’Infame indeed.
Posted by Unknown at 8:55 AM