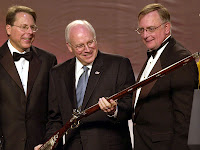 It is a pretty sad nation that has to get its relevant and controversial news from a comedy show, but such is the status of early 21st century USA. Last week, The Daily Show with Jon Stewart broadcast a bit from an interview that Marta Raddatz of ABC News conducted on March 19 with Vice President Dick Cheney, on the occasion of the fifth (gasp!) anniversary of the beginning of the war in Iraq (the very same one that, according to Bush, was won a few weeks after the invasion, the infamous “mission accomplished” charade). Here is the relevant piece of dialog:

Interviewer: “Two thirds of Americans say it’s not worth fighting.”
Dick: “So?”
Interviewer: “You don’t care what the American people think?”
Dick: “No, I think we cannot be [pause to look for the right words to avoid making a bad situation worse] blown off course by the fluctuations in the public opinion polls.”

Now, besides the fact that, as Stewart pointed out, this is the same Dick who was bragging about positive polls when the polls where positive (hey, consistency is the last refuge of small minds, as we all know), the stunning “so?” response should have provoked an uproar among the American population.

At the very least it shows that Cheney isn’t even a good politician, in the diminutive sense of the term (i.e., someone who can fool most of the people most of the times). Even if the VP of the United States of America thinks that the opinion of the people who elected him (sort of) isn’t worth shit, he should have better sense than actually saying so on national television.

But of course the real scandal is that this is an administration which, in the name of spreading democracy throughout the world, has gotten so casual with democracy at home to actually admit that it does not give a damn about what Americans think. Pause for a moment and try to digest the implications of that simple word, “so?” (It helps if you actually watch the video, where you can clearly see the smirk on Cheney’s face.) In a real and mature democracy, that single comment should have caused a national uproar, with people forcefully asking for an apology from the President, as well as for Dick’s immediate resignation. Instead, we all went to the movies during the weekend, and spent $24,590,596 to go see “Dr. Seuss' Horton Hears a Who!” Who says the economy is in trouble and we are in a recession? Not Dick, who in the same ABC News interview said that we are simply hitting “a rough patch.” You know, just like the insurgency in Iraq is “in its last throes.” Oh, wait, that was March 2005.
Posted by Unknown at 9:39 AM