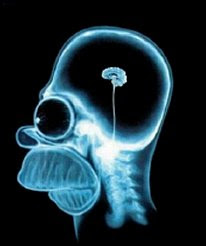 This idiotic statement has become a widespread urban myth, the origin of which is difficult to track, according to an article by Benjamin Radford in snopes.com (a highly recommended website for urban legends and assorted crap that people believe without evidence).

As Radford points out, that it is a myth is obvious as soon as one actually engages her (full) brain for more than a moment to ponder the claim itself: if we really used only a fraction of our thinking organ, why do brain scans show large areas of it being activated by a variety of different tasks? Moreover, why is it that brain injuries so often carry awful alterations of the victim's thinking abilities, and even personality? If 90% of the stuff is useless, then brain surgeons could afford to be much less careful with the object of their operations, no?

Radford reports that there are several versions of the myth, all of which don't stand up to even a superficial scrutiny. For example, some people claim that the unused 90% is part of the subconscious, but the subconscious does a lot of work, and in fact is crucial in providing us with the pre-processed thinking material that eventually emerges to the level of consciousness and is the basis on which we make our decisions (also known as “intuition”). A more charitable interpretation of the myth is that we use only a percentage of the brain at any given time (though the 10% figure still comes out of thin air). That is definitely true, but trivially so: in the same way, we don't use all of our muscles at the same time, but that doesn't mean that a large part of our muscular system is therefore useless, or is waiting to be tapped into to make us superhuman.

The latter is apparently the main reason the myth persists. According to Radford, psychics and other cuckoos use the allegedly missing 90% as an “explanation” of why some people develop psychic powers. Uri Geller, the notorious buffoon who claims to be able to bend metal by sheer mental power, for example, has written that “our minds are capable of remarkable, incredible feats, yet we don't use them to their full capacity. In fact, most of us use about 10 percent of our brains, if that” (from Uri Geller's Mind-Power Book, cited by Radford). Well, maybe people who buy Geller's books use a fraction of their brains, but of course the claim is a non sequitur even if the 10% myth were in fact true: Geller, like many other psychics, paranormalists, ufologists and creationists, is making an argument from ignorance (often, as in this case, their personal one). He is saying that since we don't know what the missing part of the brain does, then it must be involved in psychic powers; but for all we know the true function of the 90% of the brain that we allegedly don't use could have been set aside to store the details of all the soap operas that we care to watch. Wouldn't that be clear evidence of intelligent design (and of God's endorsement of daytime TV)?

The fact of the matter is that we actually use all areas of our brain, at different times and for different purposes. The real mystery is how is it possible that people endowed with roughly the same amount of matter capable of generating reasoning can come to dramatically different understandings of the world, with such a large percentage (about half of the United States population, if one uses creationism as a reference) so completely off the mark set by reality.
Posted by Unknown at 8:45 AM