My problems with Made in China 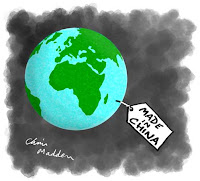 Lately I have been on a quest for a more mindful and ethical way of living, particularly as regards my buying habits. It is not easy, I tell you. Yes, there are — of course — apps for that,  but let’s not kid ourselves. Trying be more ethical (or at least less unethical) requires work and will likely cost you more than if you don't give a crap about the environment, workers’ conditions, or the use that corporations make of the money you send their way when you buy their products.

At any rate, one of the things I have taken to avoiding is purchasing things that are “Made in China” (henceforth, MiC) or — to be more precise — things that are made in China by non-Chinese corporations. (Yes, yes, my Apple products are the obvious big exceptions. But Apple has been sensitive to complaints about workers’ treatment, is a significantly environmentally conscious corporation, and its products kick everyone else’s ass by a long shot. Besides, I said I was trying to be more ethical, not a saint.)

My decision has actually caused me a significant amount of difficulty, as it is nearly impossible to find clothes or kitchen utensils (the two major items usually on my shopping list, other than food and books) that are not MiC. Try it as an exercise in globalization appreciation and you will soon get a very clear sense of just how pervasive Chinese products are in the United States (and, I presume, elsewhere).

Since this is costing me a bit of effort (and money), it better be a decision based on sound reasoning. Which brings me to a standard objection I encounter when I say that I try to avoid MiC: what do you have against Chinese workers? The sentiment behind said objection seems to be a utilitarian argument that goes something like this: i) There is at least a partial trade-off between buying Chinese and, say, buying American (because presumably each of us has a limited purchasing power); ii) American workers are already far better off than Chinese workers; therefore: iii) buying Chinese helps Chinese workers significantly more than it would help American workers; therefore iv) buying MiC is actually the ethical thing to do! QED

I could, of course, point out that I am not a utilitarian, and indeed I will return to this point below. But that would be a bit too fast and far from philosophically satisfying. So here are three more articulated reasons I try to stay away from MiC.

Reason #1: The Chinese government makes money off my purchases and uses it for unethical aims. If you are a foreign company wishing to do business in China you will likely (though not necessarily) enter into a partnership with the Chinese government, since ⅘ of Chinese acquirers, which greatly facilitate foreign investment, are in fact state-owned enterprises (China is far from being a fully capitalistic society, although Chinese-only businesses have gradually been given an unprecedented degree of market freedom over the past few decades). This means that a good chunk of my money will go straight to coffers of the Chinese government, which has used its gigantic financial and political muscle to pursue a long list of policies that I abhor (e.g., the occupation of Tibet, the constant threat to the independence of Taiwan, a large number of cynically self-serving obstructions at the United Nations, and of course the suppression of its own people). Of course, pretty much every government on earth (certainly including the United States) engages in actions that I abhor, so this is a matter of degree. But much in life turns out to be an issue of quantity, not quality, so there.

Reason #2: Foreign companies shifting production to China have an ethical debt to their own previous workers. A number of well known companies have made their name because for a long time they produced high quality products by using skilled and, broadly speaking, well paid workers. When these companies move production to China (or other cheap labor places) they pocket huge differential profits at the expense of the workers that built their reputation (and not at all rarely they do so while still getting tax breaks from the country whose workers they just sacked). And no, much of those gains don’t go either to the Chinese workers or to the consumers, they end up in the pocket of investors and CEOs. I consider this sort of shift profoundly unethical, pace Thomas Friedman and his freakin’ “flat” world. While this type of consideration is particularly cogent for MiC, it also applies to any company based in nation X that suddenly moves production to (much cheaper, less regulated, more exploitable) nation Y. For instance, I have recently noticed an extremely irritating trend of the type “Designed in France, Made in Vietnam,” to which I respond that I’ll buy Designed and Made in either France or Vietnam, but not an exploitative mix of the two, thank you very much.

Reason #3: My ethical concerns are built on an expanding circle, and China is at the other end of the world. I have found that this is the most difficult point to get across, since most people tend to reason ethically using a utilitarian framework, whether they realize it or not. As I have argued recently on this blog I think that we — as individuals, not as societies — have asymmetrical moral duties toward other people. Most obviously, we owe particular attention to our family and friends, but also, I think, to our fellow citizens, and only eventually to the whole of humanity. This is most emphatically not because some people are better than others, but because relationships (which one cannot possibly have with the whole world) are matters of degree and carry associated commensurable duties toward individuals (up to a point, of course, as discussed on my second post on Aristotle vs Rawls). This really shouldn’t be very controversial: lots of people think it a good idea to “buy local,” because they want to reduce the environmental impact of their choices and because they belong to a community which they wish to support. Accordingly, I prioritize buying things made in New York (my local community), and in the United States (my extended community), and only then do I go beyond that, other things being equal (see Apple disclaimer above).

Of course, much of this applies not just to MiC, but to many other instances where workers are exploited or autocratic governments take advantage of capitalist greed. Still, it seems to me that China is by far the worst offender, both in terms of the sheer number of companies and products involved, and in terms of its huge (mostly negative) influence in world politics.

It is of course conceivable that things will change sufficiently over the years to lessen the impact of some of my objections to MiC, though recently the trend has actually been in the opposite direction. Objection #1 is the most likely to be ameliorated at some point, if China keeps moving toward a fully capitalistic society, with the economic gain of the government eventually reduced to just that originating from taxes. Objection #2 may also decrease in impact if workers in underdeveloped countries organize and gradually obtain more rights and negotiating power. This seems highly unlikely at the moment, and in fact would buck the global anti-labor trend of recent decades. Objection #3 will, however, remain in place because it is to a very large extent independent of conditions on the ground. Another way to look at #3 is that I simply object to the loss of local culture which is the inevitable result of increased globalization. For a while now it has been very difficult to bring back meaningful gifts to friends and family from my trips abroad, for the simple reason that the same limited number of corporations owns retail outlets pretty much everywhere on the planet, and those outlets sell pretty much the same products to everyone on earth. I guess I truly do see the very idea of a multinational corporation (particularly bestowed with the legal rights of personhood) as the great evil of the 21st century. But that’s another story for another post.
Posted by Unknown at 7:00 AM