The question of belief, part II 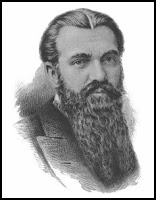 [The First part of this essay, on William James’ “The Will to Believe,” appeared here.]

Last time I examined in detail James’ famous “Will to Believe” essay, and found it disappointing to say the least. In fact, it is so badly argued that it is hard to imagine why it is so widely cited (maybe most people who cited it haven’t actually read it?), or why it has not contributed to at least questioning James’ credibility as a first rate philosopher (he did write plenty of other nonsense, you know).

At any rate, it’s now time to turn to an examination of the other classic about belief, this one on the side of skepticism: William K. Clifford’s “The Ethics of Belief,” published in 1877. I will not spoil anything if I tell you right now that I found it much, much more convincing than James’ effort. But let’s take a look at the details.

Clifford’s essay is divided into three parts: The duty of inquiry, The weight of authority, and The limits of inference. The “duty of inquiry” begins with a couple of hypothetical examples, one concerning a ship owner who has reasons to suspect that his ship needs substantial repairs but who manages to (genuinely, ex hypothesis) convince himself that she can take another voyage at sea. Turns out she couldn’t: the ship, cargo and crew are lost, and the owner pockets the insurance with a clear conscience. For a modern equivalent, think of the Wall Streeters who caused the 2008 collapse of the world economy — sans the assumption that they did not know better.

The second example will remind the modern reader of Faux News: it concerns some “agitators” who publish unfounded pamphlets for political-religious purposes, with the aim of discrediting people belonging to another faction. Turns out, there was no factual basis to the agitators’ accusations (think Sarah Palin and the “death panels,” to pick on one of too many pertinent recent cases).

Clifford makes an important distinction between the truth / falsity of a given notion and whether one has sufficient grounds to believe said notion: “the question is not whether their belief was true or false, but whether they entertained it on wrong grounds. ... Every one of them, if he chose to examine himself in foro conscientiae, would know that he had acquired and nourished a belief, when he had no right to believe on such evidence as was before him; and therein he would know that he had done a wrong thing.”

I love the image of a “foro conscientae,” and have amused myself thinking that maybe even Sean Hannity has such a locus in his conscience, where he does — however dimly — realize that he is no different from Clifford’s agitators. But I quickly concluded that Hannity probably does not have any such foro. Still, the point remains, Clifford frames the issue of belief as a moral one. As he famously put it, in the very same first section of the essay, “it is wrong always, everywhere, and for anyone, to believe anything upon insufficient evidence.”

But why, exactly? On what grounds does Clifford claim that believing something without (or, worse, in spite of) sufficient evidence is not just an epistemic error, but amounts to a moral one? Because “No real belief, however trifling and fragmentary it may seem, is ever truly insignificant; it prepares us to receive more of its like, confirms those which resembled it before, and weakens others; and so gradually it lays a stealthy train in our inmost thoughts, which may someday explode into overt action, and leave its stamp upon our character for ever.” That is, bad beliefs, and a general attitude of not looking seriously into the evidence, form a mental habit that leads to un-virtue. You begin by accepting small bullshit, you end up believing in big bullshit. You don’t question astrology and horoscopes, you end up believing an unscrupulous politician who tells you that we need to invade another country because it harbors invisible weapons of mass destruction...

Clifford also puts forth a positive case for the morality of examining one’s beliefs: “Our words, our phrases, our forms and processes and modes of thought, are common property, fashioned and perfected from age to age; an heirloom which every succeeding generation inherits as a precious deposit and a sacred trust to be handed on to the next one, not unchanged but enlarged and purified, with some clear marks of its proper handiwork. ... An awful privilege, and an awful responsibility, that we should help to create the world in which posterity will live.” That is, we shouldn’t just be concerned about leaving the world a better place to our posterity in terms of, say, less financial debt and more environmental cleanliness, but also enriched by new truths and cleansed of some previously held baloney.

All right, a reasonable objection might go, but I’m a busy person, I don’t have time to investigate every belief I contemplate throughout my life. Clifford’s suggestion may be moral, but it surely sounds impractical. Which brings us to the second part of the essay, on “the weight of authority.”

Clifford begins by pointing out that there is little actual danger of people falling into a systemic skeptic paralysis as a result of his suggestion that beliefs should be examined against the evidence. To begin with, often we are epistemically on solid ground when we believe something probabilistically, as certainty is far too high a standard in most cases. More importantly, Clifford maintains that we may be entitled to believe things on the ground of someone else’s testimony, as long as we have good second-order reasons to think that said testimony is accurate and credible.

A common problem — says Clifford — is that too many people mistake a person’s good character for an indicator of the truth of what that person says. His example is a contrast between none other than the prophet Mohammed and the Buddha! Even assuming both people being of good character, “The Prophet tells us that there is one God, and that we shall live for ever in joy or misery, according as we believe in the Prophet or not. The Buddha says that there is no God, and that we shall be annihilated by and by if we are good enough. Both cannot be infallibly inspired; one or other must have been the victim of a delusion, and thought he knew that which he really did not know. Who shall dare to say which? And how can we justify ourselves in believing that the other was not also deluded?” Wow. Remember, this was 1877, way before Richard Dawkins and the New Atheists!

Does this mean that all human testimony is therefore suspect? Not at all: “If a chemist tells me, who am no chemist, that a certain substance can be made by putting together other substances in certain proportions and subjecting them to a known process, I am quite justified in believing this upon his authority, unless I know anything against his character or his judgment.” That is, one can believe (to a degree, conditionally, probabilistically) the opinions of credentialed experts in a particular domain, especially if such opinions represent a consensus among those who have expertise in that domain.

The issue of expertise is a complex one, which I tackled a bit in chapter 12 of Nonsense on Stilts. Sometimes there is no consensus among experts (string theory), or the consensus opinion may turn out to be wrong after all (there is no aether), or the domain of expertise itself is actually empty (astrology, theology). Still, the issue is that — other things being equal — your best bet in any given case is to tentatively accept expert opinion unless you are an expert yourself, just like you would bring your car to be fixed by a certified mechanic, unless you yourself know a lot about cars.

What about “the limits of inference,” which constitutes the last part of Clifford’s essay? The starting point here is that we all make inferences, because even the most basic human knowledge cannot be based only on direct experience. Here is a simple example: “A little reflection will show us that every belief, even the simplest and most fundamental, goes beyond experience when regarded as a guide to our actions. A burnt child dreads the fire, because it believes that the fire will burn it today just as it did yesterday; but this belief goes beyond experience, and assumes that the unknown fire of to-day is like the known fire of yesterday. Even the belief that the child was burnt yesterday goes beyond present experience, which contains only the memory of a burning, and not the burning itself; it assumes, therefore, that this memory is trustworthy, although we know that a memory may often be mistaken.”

These are profound observations, pointing out two general features of human inference that ought always be kept in mind: first, it depends on the trustworthiness of our own epistemic tools, in this case memory (but also perception, and of course reason itself). These tools are limited and faulty, which means that no human being can claim perfect knowledge of very much out there. Second, our inferential ability rests on a fundamental assumption about the continuity of the world and the natural laws that regulate it. This is the well known problem of induction raised by David Hume, of course.

Clifford, like Hume, takes a pragmatic approach to the problem: “Are we then bound to believe that nature is absolutely and universally uniform? Certainly not; we have no right to believe anything of this kind. The rule only tells us that in forming beliefs which go beyond our experience, we may make the assumption that nature is practically uniform so far as we are concerned. Within the range of human action and verification, we may form, by help of this assumption, actual beliefs; beyond it, only those hypotheses which serve for the more accurate asking of questions.” It is a position that is at the same time extremely powerful and epistemically humble. Yes, using faulty tools and making certain assumptions are unavoidable limitations on human cognition. But has anyone got a better idea? Certainly not the prophets, ideologues and charlatans that infect the air of modern discourse, just as they did in 1877.
Posted by Unknown at 7:00 AM