Morality can — and should — be legislated 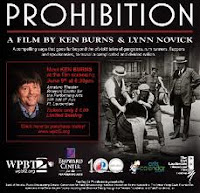 Recently I have been watching the new Ken Burns documentary “Prohibition," which tells the story of the rise, rule, and fall of the Eighteenth Amendment to the U.S. Constitution. The five-and-a-half hour film series is fantastic in both its narrative and historical detail, and is well worth the watch for anyone interested in learning about the Prohibition era. However, I have discovered one flaw with the documentary.

The overarching message of “Prohibition” is that while the Eighteenth Amendment was “intended to improve, even to ennoble, the lives of all Americans, to protect individuals, families, and society at large from the devastating effects of alcohol abuse,” the attempt was an utter failure. Why? Because morality cannot be legislated. Or so the documentary seems to argue.

I have previously written on this blog on the relationship between morality and law. In December 2010, I discussed several factors that often determine when morality becomes law. In that essay, I argued that this happens depending on, among other factors, a) whether it is practical to encode a given ethical conviction into law, and b) the potential or real harm being caused by a given action. However, the question of whether morality can or should be legislated is a different, and even more, fundamental one.

It seems obvious to me that morality can be legislated. The amendment discussed by the aforementioned documentary is evidence enough. But the relationship between morality and law runs much deeper than one failed amendment. Indeed, this country’s foundational philosophical concepts — life, liberty, and the pursuit of happiness — are rooted in morality. So are fundamental principles found in the Bill of Rights, such as the right to freedom of speech and belief, the right to assembly, the right to privacy, and the right to a fair trial. This list continues on, from basic crimes like murder, rape, and robbery, to insider trading and so-called sin laws, like cigarette taxes or seat belt fines.

Each one of these examples is based on some prior moral notion about what is right or wrong, or what is good or bad. In short, as Barack Obama argues in his book, The Audacity of Hope (for reference, page 218, though I suggest you read the entire book), I propose that most law, either in spirit or letter, is nothing but encoded morality.

However, one could still ask here whether morality can be effectively legislated — whether laws relating to morality actually work. In some ways, this is an empirical question, to be determined on a case-by-case basis. You start with assumptions and goals about certain moral notions and the laws they logically entail, and then collect data from there. Did most people who drank before Prohibition stop? Were most people who might have drunk during Prohibition prevented from doing so? Do cigarette taxes dissuade people from smoking cigarettes, and recoup health care costs caused by smokers? Do seat belt laws save lives?

But this is not as easy a process as it might appear to be. That’s because some moral-political rights are simply not amenable to empirical study and calculation. For instance, we don’t limit or take away the right to free speech just because a person's exercise of that right led to deaths (the minor exception: if someone creates an imminent danger by yelling “fire!” in a crowded theater when there is no fire). Nor do we cancel murder trials and summarily execute people simply because strict court rules might have allowed a couple of people to get away with murder. These sorts of rights are as close as we come to absolute moral rules.

Still, we have to cross the is-ought gap, and face the question of whether morality should be legislated. My answer is yes. Broadly speaking, morality is the domain of one’s thinking — beliefs, attitudes, and feelings — about the well being of conscious creatures. It concerns right and wrong, good and bad, questions of how we should act toward one another, and the kind of people we should want to be. The legal realm (whether a piece of political legislation or a court decision) is where these beliefs, attitudes, and thoughts are societally enacted. In this sense, the connection between morality and legality is natural and inherent.

But there is another reason to enforce moral norms: if your conscience tells you some action may be causing great harm to society, you have both the right and, I believe, the duty to try to help or correct the situation, through both social and political means. In this sense, we should not be afraid of moralizing. Instead, we should be afraid of not moralizing. The consequence of not moralizing is unchecked harm. The consequence of moralizing is potentially a safer environment and perhaps even a more virtuous populace.

Yet, while I believe the relationship between morality and legality is both natural and acceptable, it can be problematic. I think there are at least two reasons why: a) the moral beliefs and values undergirding a given law can be false or unreasonable, or b) the law in question can be based on non-moral criteria.

The first condition is self-explanatory, though what makes for good reasons and good evidence is an entirely distinct subject, possibly for another essay.

The second condition was precisely the problem with prohibition. Alcohol consumption is not intrinsically a moral issue. It is an issue of preference, which is not a valid domain of law. Alcohol consumption only becomes a moral, and thus a legal, issue when it is abused and causes harm to others and/or society. When it does, we have laws to handle those situations. For instance, drunk driving is illegal and punishable.

It is important to be mindful of these two factors. We must ensure that we are encoding reasonable morality, but we also must ensure that what we are dealing with is an actual moral issue. Legislating preference is unethical and should be illegal, while legislating morality is, in theory, what we ought to do.
Posted by Unknown at 11:00 AM