Don’t blame free speech for the murders in Afghanistan 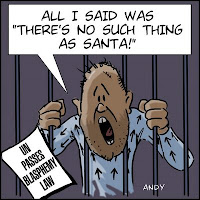 by Michael De Dora
Last week, an angry mob of Afghani protesters enraged by the recent burning of a Koran in Florida — their angers stoked by local Muslim leaders — stormed a U.N. compound and murdered at least 7 people. The only thing more upsetting than this incident has been the public response blaming these deaths on Pastor Terry Jones and Wayne Sapp, a member of Jones’ congregation at the Dove World Outreach Center, who torched a Koran on March 20.
The most disturbing example of this response came from the head of the U.N. Assistance Mission in Afghanistan, Staffan de Mistura, who said, “I don't think we should be blaming any Afghan. We should be blaming the person who produced the news — the one who burned the Koran. Freedom of speech does not mean freedom of offending culture, religion, traditions.” I was not going to comment on this monumentally inane line of thought, especially since Susan Jacoby, Michael Tomasky, and Mike Labossiere have already done such a marvelous job of it. But then I discovered, to my shock, that several of my liberal, progressive American friends actually agreed that Jones has some sort of legal and moral responsibility for what happened in Afghanistan. I believe he has neither. Here is why.
Unlike many countries in the Middle East and Europe that punish blasphemy by fine, jail or death, the U.S., via the First Amendment and a history of court decisions, strongly protects freedom of speech and expression as basic and fundamental human rights. These include critiquing and offending other citizens’ culture, religion, and traditions. Such rights are not supposed to be swayed by peoples' subjective feelings, which form an incoherent and arbitrary basis for lawmaking. In a free society, if and when a person is offended by an argument or act, he or she has every right to argue and act back. If a person commits murder, the answer is not to limit the right; the answer is to condemn and punish the murderer for overreacting.
Of course, there are exceptions to this rule. Governments have an interest in condemning certain speech that provokes immediate hatred of or violence against people. The canonical example is yelling “fire!” in a packed room when there in fact is no fire, since this creates a clear and imminent danger for those inside the room. But Jones did not create such an environment, nor did he intend to. Jones (more precisely, Wayne Sapp) merely burned a book in a private ceremony in protest of its contents. Indeed, the connection between Jones and the murders requires many links in-between. The mob didn’t kill those accountable, or even Americans.
But even if there is no law prohibiting Jones’ action, isn’t he morally to blame for creating the environment that led to the murders? Didn’t he know Muslims would riot, and people might die?
It seems ridiculous to assume that Jones could know such a thing, even if parts of the Muslim world have a poor track record in this area. But imagine for a moment that Jones did know Muslims would riot, and people would die. This does not make the act of burning a book and the act of murder morally equivalent, nor does it make the book burner responsible for reactions to his act. In and of itself, burning a book is a morally neutral act. Why would this change because some misguided individuals think book burning is worth the death penalty? And why is it that so many have automatically assumed the reaction to be respectable? To use an example nearer to some of us, recall when PZ Myers desecrated a communion wafer. If some Christian was offended, and went on to murder the closest atheist, would we really blame Myers? Is Myers' offense any different than Jones’?
I think I know why many people want to turn around and blame Jones: the deep-seated belief among many that blasphemy is wrong. This means any reaction to blasphemy is less wrong, and perhaps even excused, compared to the blasphemous offense. Even President Obama said that, "The desecration of any holy text, including the Koran, is an act of extreme intolerance and bigotry.” To be sure, Obama went on to denounce the murders, and to state that burning a holy book is no excuse for murder. But Obama apparently couldn’t condemn the murders without also condemning Jones’ act of religious defiance.
As it turns out, this attitude is exactly what created the environment that led to murders in the first place. The members of the mob believed that religious belief should be free from public critical inquiry, and that a person who offends religious believers should face punishment. In the absence of official prosecution, they took matters into their own hands and sought anyone on the side of the offender. It didn’t help that Afghan leaders stoked the flames of hatred — but they only did so because they agreed with the mob’s sentiment to begin with. Afghan President Hamid Karzai said the U.S. should punish those responsible, and three well-known Afghan mullahs urged their followers to take to the streets and protest to call for the arrest of Jones. “Burning the Koran is an insult to Islam, and those who committed it should be punished,” said Mullah Mohammed Shah Adeli. For the threat to be followed by actual murder they needed an audience who agreed. Sadly, they had one.
Let me be clear: I do not like Terry Jones or his views. I also would not burn a Koran. I’d rather have people read it. But these sentiments are not enough to bend the law or warp my sense of morality. As Voltaire said, I will defend the right to free speech for even those I disagree with most. Blame for the horrible acts in Afghanistan does not fall on the people who criticized Islam. It falls on the fundamentalists who think that people who speak out against religious belief deserve death.
Posted by Unknown at 9:01 AM