Response to Jonathan Haidt’s response, on the academy’s liberal bias

by Massimo Pigliucci
Dear Prof. Haidt,
You understandably got upset by my harsh criticism of your recent claims about the mechanisms behind the alleged anti-conservative bias that apparently so permeates the modern academy. I find it amusing that you simply assumed I had not looked at your talk and was therefore speaking without reason. Yet, I have indeed looked at it (it is currently published at Edge, a non-peer reviewed webzine), and found that it simply doesn’t add much to the substance (such as it is) of Tierney’s summary.
Yes, you do acknowledge that there may be multiple reasons for the imbalance between the number of conservative and liberal leaning academics, but then you go on to characterize the academy, at least in your field, as a tribe having a serious identity issue, with no data whatsoever to back up your preferred subset of causal explanations for the purported problem.
Indeed, your talk is simply an extended op-ed piece, which starts out with a summary of your findings about the different moral outlooks of conservatives and liberals (which I have criticized elsewhere on this blog), and then proceeds to build a flimsy case based on a couple of anecdotes and some badly flawed data.
For instance, slide 23 shows a Google search for “liberal social psychologist,” highlighting the fact that one gets a whopping 2,740 results (which, actually, by Google standards is puny; a search under my own name yields 145,000, and I ain’t no Lady Gaga). You then compared this search to one for “conservative social psychologist” and get only three entries. Voilà, case closed, bias demonstrated!
Really? First of all, if Google searches are the main tool of social psychology these days, I fear for the entire field. Second, I actually re-did your searches — at the prompting of one of my readers — and came up with quite different results. As the photo here shows, if you actually bother to scroll through the initial Google search for “liberal social psychologist” you will find that there are in fact only 24 results, to be compared to 10 (not 3) if you search for “conservative social psychologist.” Oops. From this scant data I would simply conclude that political orientation isn’t a big deal in social psychology. 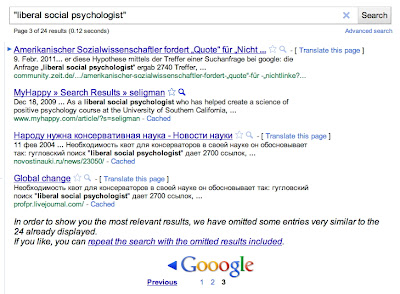 Your talk continues with some pretty vigorous hand-waving: “We rely on our peers to find flaws in our arguments, but when there is essentially nobody out there to challenge liberal assumptions and interpretations of experimental findings, the peer review process breaks down, at least for work that is related to those sacred values.” Right, except that I would like to see a systematic survey of exactly how the lack of conservative peer review has affected the quality of academic publications. Oh, wait, it hasn’t, at least according to what you yourself say in the next sentence: “The great majority of work in social psychology is excellent, and is unaffected by these problems.” I wonder how you know this, and why — if true — you then think that there is a problem. Philosophers call this an inherent contradiction, it’s a common example of bad argument.
Finally, let me get to your outrage at the fact that I have allegedly accused you of academic misconduct and lying. I have done no such thing, and you really ought (in the ethical sense) to be careful when throwing those words around. I have simply raised the logical possibility that you (and Tierney) have an agenda, a possibility based on reading several of the things both you and Tierney have written of late. As a psychologist, I’m sure you are aware that biases can be unconscious, and therefore need not imply that the person in question is lying or engaging in any form of purposeful misconduct. Or were you implying in your own talk that your colleagues’ bias was conscious? Because if so, you have just accused an entire profession of misconduct.
Posted by Unknown at 8:47 AM