A recurrent theme of discussion on this blog is the difference between science and philosophy, or rather between science and everything else. The same subject was the topic of a highly enjoyable discussion in one of my classes (appropriately, on the philosophy of pseudoscience) at CUNY’s Graduate Center this week (even Julia joined in as a guest!), and it has popped up again in the thread to my most recent 5-minute Philosopher video. And of course the title of this entry is a reference to Jerry Coyne’s occasional remark that there is no substantial difference between plumbing and science because plumbers test hypotheses based on empirical evidence.

Except, of course, that plumbing is not science, and here is why. First off, let’s stipulate two things: on the one hand, there are no sharp demarcation lines dividing science from pseudoscience and non-science — but hopefully we’ll agree that no sharp demarcation does not mean that there are no significant differences. On the other hand, I don’t actually believe that anyone takes seriously the proposition that all reason-based knowledge is “scientific.” If that were the case, then pretty much everything we do every day should count as science — from picking a movie based on a review by a critic we usually like (induction!) to deciding to cross the street when the pedestrian light is green (hypothesis testing!). If the concept of science is that expansive, than it is also pretty close to meaningless.

Why is biology a science, and plumbing is not? Let’s start with what they have in common: both activities assume certain background “theories” within which they work: let’s say the theory of evolution for biology, the physics, engineering and construction practices of hydraulics in the case of plumbing. In both cases, the “practitioners” use those general frameworks to solve specific puzzles: a biologist may be interested in the adaptive significance and genetic basis of a particular phenotype, the plumber may need to fix your toilet. Finally, the way both practitioners proceed to solve whatever puzzle they need to solve is to use empirical evidence and confront it with their expert knowledge. (Of course a major difference between the two is that plumbers are often paid more than biologists, by the hour.)

As I mentioned earlier, however, this analysis does not get us very far. If you substitute almost any other human activity — including crossing the street on your way to the grocery store — for “plumbing” above, the essence of the analogy remains intact. Which should be a warning that there is something amiss here (again, unless you are willing to bite the bullet and go for an extremely expansive definition of science — and even so, there’s more to come).

The thread linking plumbing and science is that in both cases we use reason and evidence. But reason and evidence are the ways human beings have gotten along in this world since the beginning of Homo sapiens (and probably earlier), and it seems strange to say that our ancestors in the Pleistocene were doing “science.” Moreover, there are ways of using reason that do not rely on empirical evidence, as in the cases of logic and math. And there are ways of using reason where evidence does play a role, but not the role that it plays in science, as in the case of philosophy. I will return to these latter distinctions at the end of this post.

What separates science from other human activities is, I suggest, its extremely more refined methods, its sociological structure, and its historical context. Let’s start with the point about the method. If plumbing really was a “science” in any interesting sense then it would be baffling that we force wannabe scientists to go through years of college, years of graduate school, and years of postdoc, to do something essentially analogous to fixing your bathroom. Ah, you might object, but the amount of technical knowledge necessary to become a biologist is much higher than that necessary to become a plumber. True, but if you think that all that young scientists learn, especially in graduate school and during their postdoc is more facts, you have never been in a real science lab.

I think of science labs as akin to Renaissance workshops, where the novices learn from the masters. Much of that knowledge is about the methods by which things get done, not just about a pile of facts to memorize. Graduate students learn the art (yes, I’m using the term on purpose — did you know that the word “scientist” was coined in 1834 by William Whewell, a philosopher, in analogy to “artist”?) of setting up controlled experiments, analyzing massive amounts of data using sophisticated statistical techniques, and writing cogent papers to present their results to the world. None of this is done by plumbers, and for good reasons.

Second, science is a particular type of social activity, certainly as conceived and practiced today. It has a complex — and necessary — structure of peer review, edited journals, funding agencies, academic positions, laboratories, and so on. Of course science has not always been practiced this way (see my next point about history), but a good argument can be made that it has evolved into a mature discipline precisely when these sort of social structures came to be implemented. Indeed, philosopher Helen Longino has made a very good case that modern science is a quintessential example of social knowledge. If you were stranded on a deserted island, you could discover things by means of conjectures and refutations — to use Popper’s famous phrase — but you wouldn’t be doing “science” because, among other things, there would be no peer group to check on your potentially crazy ideas about the nature of the universe (remember that neurobiological research shows the human brain being incredibly good at rationalizing, more than at rational thinking).

Third, here as elsewhere, there is much we can learn from history. The history of science is a fascinating illustration of how a practice that initially truly was barely distinguishable from plumbing eventually became a major branch of philosophy (natural philosophy), and then flourished spectacularly as an independent type of inquiry beginning in the 16th and 17th centuries (Galileo and Newton), culminating in the 19th and 20th centuries (modern physics, biology after Darwin) and beyond. The fact that it was a long process marked by many steps is congruent with one of the points I stipulated at the onset: there is no sharp line demarcating science from other activities. But the fact that we think of modern science as product of that historical process, and as distinct from its progenitors and allied fields, means that it is indeed its own thing, and this thing called science ought to be respected for what it is, neither less (as so many Americans have a tendency to do — see creationism, vaccine denialism, and the skepticism about global warming) nor more (as some of my colleagues wish to do by claiming an all-encompassing sphere of influence for their discipline).

I would like to conclude this sketch with two more notes: one about why this matters (Julia always asks me this question, so it has now been drilled into my brain), and the other with a proposal for an alternative way to look at the relationship between science and other disciplines that deal with reason and evidence.

Why does it matter? Well, as a philosopher and scientist, I have an intrinsic interest in the nature of knowledge, and I really don’t think I need any other reason to justify this sort of project. Nonetheless, there are other, more practical, reasons to pursue it. Science is a multi-billion dollar industry, which means that it matters very much who can claim to be doing “science.” Witness the fact that most supporters of pseudoscience, from creationism to parapsychology, wish to convince us that they are doing science. Moreover, science has a large impact on society, which implies a huge responsibility for scientists to claim no more or less than what they can reasonably claim. The credibility of the entire enterprise is at stake whenever a scientist says things on behalf of science that are not in fact backed up by scientific (in the narrow sense) knowledge.

Finally, there is of course a sense in which science and philosophy, and indeed math and logic, are connected. This sense, ironically, goes back to that very same William Whewell who coined the term scientist. He got it from the Latin word scientia, which means knowledge in the broadest sense. As my diagram below indicates, I think it is reasonable to see the totality of third-person knowledge (as opposed to first-person, phenomenological knowledge) along a rough continuum from completely or almost completely abstract (logic and math — by saying “almost completely” I am allowing for so-called experimental mathematics) at one end, to necessarily coupled to empirical evidence (science), passing via an intermediate field where empirical evidence is relevant but most of the work is done via analysis and logic (philosophy). 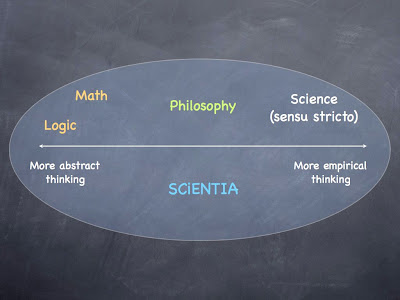 This is the sense in which I think scientia, but not science sensu stricto, can reject the supernatural (Coyne’s and Dawkins’ project), or arrive at non arbitrary moral judgments (Harris’ project). It is also why my personal opinion is that academic philosophy departments (where logic is taught, incidentally) should be housed together with the sciences and math, as they have much more in common with them than with, say, history or literature. Regardless, it is in this sense — the continuity and yet individuality of these disciplines within the broader category of scientia — that I argue that plumbing ain’t science, as honorable and necessary as that trade is to our everyday lives.
Posted by Unknown at 9:01 AM