Who’s responsible for the obesity epidemic? 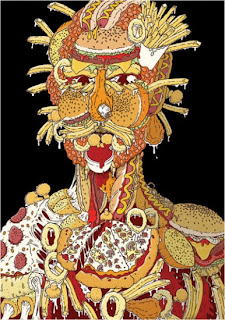 There is no question that we are in the midst of an obesity-related health crisis. The numbers are staggering and keep getting worse every year. The current situation in the United States is hard to believe: one third of adults are clinically obese, and so is one fifth of all children; a whopping 24 million Americans are affected by type II diabetes, usually the result of a poor diet. And the numbers are getting worse in much of the rest of the developed world as well. This is going to cost a lot in terms of lives, pain and suffering, and of course financially, to the nation as a whole. It’s a good question to ask ourselves who bears responsibility for all this, and the answer is not at all obvious or simple.

The New York Times has recently published a long, fascinating article by Michael Moss (author of the forthcoming Salt Sugar Fat: How the Food Giants Hooked Us) on the relationship between the food industry and the obesity epidemic. Yeah, I know, the first time I heard of someone blaming McDonald’s instead of its customers for their bad eating habits I too thought “oh c’mon,” but that was the same reaction many had when the tobacco industry began to be blamed for the health problems caused by smoking, and nobody’s laughing dismissively at that any more.

Before we proceed, let me warn the reader that this post is going to be largely about the sins of the food industry, but this doesn’t mean I don’t think other actors bear responsibility. Indeed, I’ll make the case by direct analogy with smoking by way of a very personal experience: my father died in 2004, aged 69. He got hit by four primary cancers in the span of five years or so, survived the first three, got killed by the last one. The ghastly and eventually lethal sequence — which ruined the last several years of his life and likely significantly shortened the time he had to spend on earth — was very likely the result of his life long habit as a heavy smoker. Do I blame the tobacco industry for his death? You bet, and I’ve got well established evidence to back me up on that, from their sneaky advertising tactics to their purposeful campaigns of addiction to augment their customer base. But I also blame my father. At some point in his life, well before the onset of his first cancer, he was well aware of the risks posed by smoking, but he ignored them and never looked for help. He paid a high price for it, and so did our family.

So, yes, personal responsibility pretty much always plays some role in human decisions. But it would be naive to the utmost degree — given the available evidence — to think that the food industry doesn’t bear some, likely even a great part, of the blame as well. And when we talk about responsibility we also usually talk about punishment and regulation, which means that what Moss is arguing in his article and book is literally worth billions of dollars.

Moss begins with the recounting of a high level meeting of major players in the food industry which could have been a game changer but, tragically, wasn’t. The meeting took place on April 8, 1999 at the Minneapolis headquarters of Pillsbury, featuring 11 people — just 11 individual human beings — who controlled most of the food companies in the United States. The meeting was called as a way to analyze and perhaps preemptively react to the first serious suggestions of a link between processed foods and obesity that were beginning to be advanced at the time. That was when the words “obesity epidemic” started to be used by politicians, health officials and the press.

The first speaker — according to Moss’s reconstruction of the event — was Michael Mudd, a Kraft Vice President who gave a lengthy presentation at the end of which he drew the parallel everyone was dreading: the one between processed food and cigarettes. He quoted Kelly Brownell, a Yale professor of public health, as saying: “As a culture, we’ve become upset by the tobacco companies advertising to children, but we sit idly by while the food companies do the very same thing. And we could make a claim that the toll taken on the public health by a poor diet rivals that taken by tobacco.” Ouch.

Mudd must have been an uncharacteristically idealistic industry insider, as his goal was to put industry scientists in the service of figuring out what was causing the epidemic, and eventually establish a code guiding the nutritional aspects of the products and the marketing strategies of the companies. Yeah, right. The second speaker was one Stephen Sanger, at the time, head of General Mills. His response effectively killed the meeting and any serious effort by the industry to police itself. Among other things, he said: “Don’t talk to me about nutrition, talk to me about taste, and if this stuff tastes better, don’t run around trying to sell stuff that doesn’t taste good.” End of story, beginning of tragedy.

The rest of the article in the New York Times is made of a series of brief sketches, presumably illustrating the bulk of Moss’s book and his contention that what he found “over four years of research and reporting, was a conscious effort — taking place in labs and marketing meetings and grocery-store aisles — to get people hooked on foods that are convenient and inexpensive.”

I will mention briefly only one of these sketches, concerning a former Coca-Cola director, Jeffrey Dunn. In 2001 Dunn was tasked with exploring the marketing of coke in poor and vulnerable markets, like New Orleans in the US, and Brazil. The question he and his colleagues were driven to answer was “How can we drive more ounces into more bodies more often?” During an exploratory trip to Brazil, Dunn had an epiphany, realizing that poor people in Brazilian favelas needed a lot of things, but most certainly coke wasn’t one of them. He went back to headquarters and attempted to steer the company toward a more, ethical strategy, for example, stopping the marketing of its products in public schools. He was soon fired.

The interesting point of these stories, I think, is that they put the issue of responsibility in a different perspective from the simplistic “nobody’s putting a gun to your head” emphasis on personal choice. And they do so in a way that is somewhat parallel to the issue of smoking and the tobacco companies, as we have seen.

Certainly people are at least in part responsible for what they choose to do, be that smoking known harmful substances or eating crap that is likely to make their lives shorter and more miserable. But certainly an exception ought to be made in the case of children, who are simply not equipped with the rational decision making tools of adults. And it is most certainly no accident that both big tobacco and big junk food go after children so intensively.

But I think there is an even broader issue at play here. Those who put an emphasis on personal responsibility — even in the case of adults only — are making an assumption that is equivalent to that of complete rational agency and full access to information in classical macroeconomics. An assumption that is obviously mistaken for pretty much the same reasons it is mistaken when used as the basis for economic theory.

Ever since the invention of marketing it has clearly been the case that consumers are systematically misled and kept in as much ignorance as possible about the ill effects of what they consume. So the idea that people can just look up stuff and figure out what to do or not to do is naive and dangerous. More importantly, though, it is the suggestion that people are, or even approximate, rational agents that is clearly mistaken.

Never mind the obvious fact that one third to one half of Americans believe in all sorts of pseudoscientific notions (ghosts, astrology, creationism) that should’t appeal to an even approximately rational individual. There is much research in cognitive science showing that human beings rely on all sorts of flawed heuristics for their decision making processes, rarely slowing down to inform themselves, critically analyzing the available information, and arriving at the best decision compatible with the latter. And of course marketing companies know this all too well. After all, the very idea of marketing started (much earlier than in the period so fascinatingly depicted in the television series MadMen) when Freud’s nephew Edward Bernays came to the United States and began a highly successful career as a consultant on how to sell pretty much everything to people, regardless of whether it was good for them or not.

Which brings us to the third actor: regulatory agencies. A lot of Americans hate the whole idea of regulation, to the point of embracing in great numbers obviously oxymoronic notions like that of “self-regulation” (would you apply that to thieves and murderers, I wonder?), and there have been interesting discussions regarding the wisdom and scope of governmental paternalism. But contra popular opinion, the actual discussion isn’t about whether the private sector (including the tobacco and junk food industries) as well as individual behavior should be regulated, but rather about the extent to which it makes sense to do so. (Clear examples of regulation that few people could reasonably argue against: seat belts and motorcycle helmets for individuals; the nuclear power industry.)

This is a classic example of a balancing act among conflicting values. We do want to keep a viable market of innovative, varied and affordable products for the public, which means that we don’t want to overdo it in the regulation department. At the same time, as a society we have an obligation to protect consumers (especially children), particularly when we know that many of them do not have the tools to make even approximately rational decisions and that they are actively being misled by the industry. This doesn’t mean that I endorse New York City mayor Michael Bloomberg’s recent ban on large soda drinks, for instance (that one does seem to me to cross the line), but I would, as an example, endorse higher taxes for those same drinks, which could be used both to discourage consumers (especially the most vulnerable and poor among them) as well as to recover funds that can be redirected toward balancing the long term health care costs inevitably caused by the consumption of those products. There is no magic bullet here, and an ethically sensible, evidence-based approach is the only way to go. But please don’t fall into the vicious trap of automatically blaming the victims.
Posted by Unknown at 8:30 AM