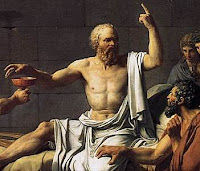 Albert Camus famously wrote that “There is but one truly serious philosophical problem and that is suicide.” It’s more than a slight exaggeration (well, there’s existentialism for ya!), but the phrase came to mind during a recent evening of web surfing, when I found myself reading a brief essay on the ethics of suicide published by a New Zealand site providing “resources for life related issues” (of which self-imposed death clearly is one). There is, of course, a long philosophical tradition of discussions about the ethical permissibility of suicide (Plato and Aristotle: against it; the Roman Stoics: in favor; pretty much everyone in the Christian tradition: against it; pretty much every Enlightenment philosopher: in favor). But what struck me as particularly interesting is the very different takes on suicide of two of the most influential philosophers all of time: David Hume and Immanuel Kant. (For a more comprehensive philosophical look at the issue see the entry in the ever more excellent Stanford Encyclopedia of Philosophy.)

Interestingly, both philosophers approached it from a deontological (duty-based) perspective. For Kant, predictably, the verdict is negative: suicide is not morally permissible on the general grounds that it diminishes the intrinsic worth of a human being to the status of an animal. I’m not sure what to make of this, since I don’t think human beings have any “intrinsic” worth. Whatever worth we have we acquire through our social interactions, and I think I could name a fair number of human beings who are less “intrinsically worthy” than your dog.

Kant considers a common argument in favor of the morality of suicide, that it may be permissible on grounds of personal freedom, since there is no (or relatively little, of an emotional type) harm to third parties. This holds no water with Kant, because he thinks that self-preservation is the highest duty we have to ourselves. Now, it is easy to argue that self-preservation is a biological imperative, but of course this does not at all translate into a duty. The problem with Kant’s general approach is that it is not clear toward whom we have such duties, other than a vague — and metaphysically highly questionable — “universal moral law.” Indeed, a reasonable retort is that a human being ought to have the freedom to decide when pain (physical or psychological) is sufficiently unendurable that one is better off terminating one’s life (let us bracket for a moment the possibility of a mental illness, to which I will return below).

Kant also proposes what appears to be a pragmatic objection to suicide, impugning the moral character of the person who contemplates it: “He who does not respect his life even in principle cannot be restrained from the most dreadful vices.” Needless to say, there is no evidence whatsoever that this is the case, and a pragmatic argument that flies in the face of facts doesn’t represent much of a promising avenue.

Hume, on the contrary, thinks that suicide is morally permissible, also on the grounds of his analysis of duties. He talks about three types of duties: to god, to ourselves, and to others. I will skip the first category, since I don’t think there are any gods toward whom we have any duties.

In terms of duties to others, Hume claims that in committing suicide we do not harm others (again, with the partial exception of the distress we may cause to loved ones). However, we also — by necessity — cease to do any good for society, which may present a problem. Hume’s response here is that our duties to society are in proportion to the benefits we receive from society (a form of pragmatic reciprocal altruism, if you will), and since we do not receive any benefits from society after we die (obviously), it follows that we do not have any duties toward it either. More broadly, in Hume’s words, “I am not obliged to do a small good for society at the expense of a great harm to myself.”

What about duties to ourselves? Hume claims that “we have such a strong natural fear of death, which requires an equally strong motive to overcome that fear,” meaning that we do not contemplate the extreme measure of suicide lightly. And the latter — to decide to terminate our life only under extreme circumstances of duress — is the only duty we may possibly have toward ourselves.

It should be clear that I find Hume’s arguments much more persuasive than Kant’s, but the question remains of the permissibility of intervention to dissuade someone from committing suicide. This is often framed in terms of the rights of autonomous moral agents vs the positive role of a certain degree of “paternalism” (a term that should not carry an automatic negative connotation, as it too often does) on the part of society.

Clearly, if there are signs of mental illness, then intervention by friends, relatives and professionals is warranted. But one can also conceive of plenty of situations — such as chronic and unendurable pain, deep but not pathological psychological distress (for instance by an old person who lost a lifelong companion), and terminal physical illness (particularly of a progressively debilitating type), where one would have to start wondering about the motives of people who allegedly wish to help.

The basic question ought to be, it seems to me, what is the best long term interest of the agent? Most of the time this will be to live as long (and as healthily) as possible. But when this is not the case — as judged by the agent himself, provided that he is capable of sound judgment — then the duty of friends, relatives and professionals switches toward understanding, moral support, and even (at least when allowed by the law) actual material assistance.

Of course, a good number of movies have explored the dimension of assisted suicide, and I particularly remember The Barbarian Invasions, a 2003 French movie set in Montreal, chronicling the last days of a terminally ill man who decides to die on his own terms, surrounded by friends and family. It is hard to imagine a better way to go, and even harder to conceive of a reasonable and compassionate objection to this kind of affirmation of moral autonomy.
Posted by Unknown at 1:47 PM