Podcast Double-Teaser: The Science and Philosophy of Happiness AND Evidence-based philanthropy 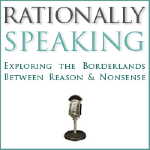 by Julia Galef
Massimo and I are gearing up to tape another double-header of the Rationally Speaking podcast, and we’ve got two fascinating topics lined up. In Episode 37 we’ll be looking at the science and philosophy of happiness. Debates over what’s important to happiness — Money? Children? Love? Achievement? — are ancient and universal, but attempts to study the subject empirically are much newer. We’ll talk about what psychologists have learned so far about which factors have a strong effect on people’s happiness and which don’t. We’ll also examine some of the surprising findings from the field — like the studies that show that parents are less happy than non-parents, or the controversial finding of leading happiness researcher Daniel Gilbert that people return to their happiness “set point” even after extreme events like winning the lottery or becoming paralyzed.
We’ll also tackle some of the philosophical questions regarding happiness, such as whether some kinds of happiness are “better” than others, and whether people can be mistaken about their own happiness. Many people make a distinction between higher and lower pleasures, putting things like love and art in the former category, and sensual pleasures in the latter category. But does that distinction make sense? And should we value truth and wisdom even if they come at the cost of less happiness, as John Stuart Mill famously argued, “It is better to be a human being dissatisfied than a pig satisfied; better to be Socrates dissatisfied than a fool satisfied. And if the fool, or the pig, are a different opinion, it is because they only know their own side of the question.”
In Episode 38 we’ll be joined by a special guest: Holden Karnofsky is the founder of Givewell, a nonprofit organization devoted to investigating charities and NGOs to determine how much of an impact they’re having. You could call it “evidence-based philanthropy” — determining whether a charity is doing good, as opposed to just telling a convincing story, and trying to figure out where you should donate your money if you want to get the most done for your dollar. We’ll talk with Holden about how Givewell evaluates charities, and about what the research has to say about various controversies in the nonprofit world: Can large charities be efficient or do they inevitably become bureaucratic? Should we focus on problems closer to home instead of giving to foreign countries? And do microfinance NGOs like Kiva or Grameen Bank live up to their claims?
Posted by Unknown at 9:01 AM