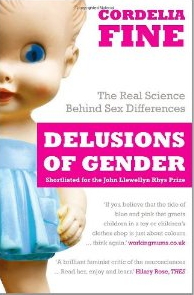 by Massimo Pigliucci
The next guest on the Rationally Speaking podcast will be Cordelia Fine, author of Delusions of Gender: The Real Science Behind Sex Differences. Fine is an academic psychologist, and previously author of A Mind of Its Own: How Your Brain Distorts and Deceives, and she will be joining us from her base in Melbourne, Australia.
Delusions of Gender is a vehement attack on what Fine considers pseudo-scientific claims about the differences between the sexes. Sex discrimination is supposedly a distant memory, yet popular books, magazines and even scientific articles increasingly defend inequalities by citing immutable biological differences between the male and female brain. That’s the reason, we’re told, that there are so few women in science and engineering and so few men in the laundry room — different brains are just better suited to different things.
Drawing on the latest research in developmental psychology, neuroscience, and social psychology, Fine sets out to rebut these claims, showing how old myths, dressed up in new scientific finery, are helping to perpetuate the sexist status quo.
One of our previous podcast guests, Carol Tavris, had this to say about the book: "a witty and meticulously researched exposé of the sloppy studies that pass for scientific evidence in so many of today’s bestselling books on sex differences. ... Anyone who would like to know what today’s best science reveals about gender differences — and similarities — could not do better than read this book."
Naturally, this is going to be a rather controversial topic, and we welcome readers’ comments and questions for Dr. Fine. Post away!
Posted by Unknown at 9:01 AM