The problem with Stoicism 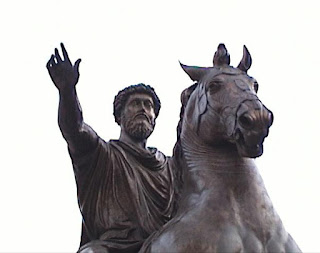 As readers of this blog know, I occasionally go back and read some of the philosophical classics, in an effort to understand what the sages of various ages thought about the meaning of life, or at least how to get by until breakfast. The latest such reading has been of Marcus Aurelius' “Meditations,” written around the middle of the 2nd century CE.

Marcus was a Roman emperor, and one of the few rulers in history who actually came close to Plato's “ideal” of a philosopher-king (an earlier aborted attempt was that of Aristotle trying to shape the thinking of Alexander, so-called the Great). Marcus didn't write the Meditations for public consumption, and the result is more an intellectual and philosophical diary than a book with an organic structure. Today Marcus would surely entertain writing it as a blog.

Marcus was a Stoic, i.e. a follower of the philosophical school that was established by Zeno in the 3rd century BCE, and that came to have disciples of the caliber of Cleanthes, Chrysippus, Cicero, Seneca the Younger, Cato the Younger and Epictetus. The basic idea, and the still current appeal, of Stoicism is that one ought (in a moral sense) to endure whatever comes in life, because that is the way of the Logos (a vague diffuse intelligence permeating the whole of nature). The focus was on spiritual self-improvement, with little regard to the external pleasures of life, and with an attitude of endurance of whatever pain (physical or emotional) may be caused by other people.

Here are some representative passages from Marcus' Meditations, to get a flavor of the Stoic attitude. Keep in mind that he was, literally, talking to himself:

* “I need to train and discipline my character.” (Book 1)

* “When you wake up in the morning, tell yourself: The people I deal with today will be meddling, ungrateful, arrogant, dishonest, jealous, and surly. They are like this because they can't tell good from evil.” (Book 2)

* “Don't waste the rest of your time here worrying about other people – unless it affects the common good. It will keep you from doing anything useful.” (Book 3)

* “Disturbance comes only from within – from our own perceptions.” (Book 4)

* “The things you think about determine the quality of your mind.” (Book 5)

* “I can control my thoughts as necessary; then how can I be troubled?” (Book 7)

* “Consider two things that should reconcile you to death: the nature of things you'll leave behind you, and the kind of people you'll no longer be mixed up with.” (Book 9)

* “The resolution has to be the result of its own decision, not just in response to outside forces, like the Christians.” (Book 11)

* “It never cease to amaze me: we all love ourselves more than other people, but care more about their opinion than our own.” (Book 12)

There is much in the above, and in the rest of this short book, that I agree with. However, one cannot help reading through the Meditations and coming away with the feeling that the Stoics – much like many Eastern mystics – have an impoverished view of life and the human condition. Yes, there is pain in the world and much of it is caused by our fellow human beings; but there is also much joy and love, and it has the same source. It may be good in times of need to be able to detach ourselves from the rest of the world and reflect on how fleeting all of it really is; but living a full life also means being engaged with that reality on a daily basis, good and bad things alike. And while there is much to commend in the Stoic attitude of withstanding pain and avoiding seeking superficial pleasures, it is hard to imagine that one can enjoy life without a good dose of those very same pleasures.

Speaking of which, where's my cappuccino?
Posted by Unknown at 1:24 PM