Evolutionary psychology, Jerry Coyne, Robert Kurzban, and the so-called creationism of the mind 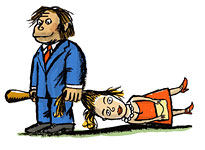 Time to take a break from philosophy of mind and get back to evolutionary psychology. The occasion originates from a recent post by evopsych researcher Robert Kurzban, on what he calls "creationism of the mind." There Kurzban excoriates our good old friend, PZ Myers for some apparently silly criticisms he leveled at the field. Kurzban goes on commending Jerry Coyne for having recently seen the light, becoming a supporter of the field. Contra to what some of my seasoned readers may expect, this is going to be neither a defense of PZ, nor an attack on Coyne. But I doubt Kurzban is going to like it anyway (about Jerry, I'm not taking bets).

Let's start with Kurzban's criticism of Myers, whom he tags with the obviously disdainful label of creationist of the mind. According to Kurzban, the latter is someone who subscribes "to the view that the theory of evolution by natural selection ought to be used to inform the study of the traits and behaviors of every living thing on the planet except the bits of the human mind that cause behavior, especially social behavior." I'm pretty sure no evolutionary biologist actually subscribes to this rather strawmanly view, including PZ, but let's proceed. Kurzban further characterizes this brand new type of "creationists" thusly: "Like creationists full stop, creationists of the mind take their positions for reasons other than looking at the relevant evidence. This is clear from the emotion that pervades their remarks about the discipline." Uhm, ok, though it is worth noting that this bit of rhetoric comes from someone who has by this point indulged in a pretty emotional characterization of his own opponents. [Note: I've got nothing against being emotional; to me it means one gives a damn. But you ought not to belittle your opponents for the same kind of behavior you yourself indulge in.]

What exactly did Myers say that so railed Kurzban? Apparently he stated that evolutionary biologists assume a one-to-one causal mapping of genes to behavior, proceeding to dismiss the field on the grounds that such an assumption is in fact ridiculously simplistic (it is). Well, if PZ did say that, he was also attacking a straw man. But the problem of genotype-phenotype mapping is, in fact, a rather big one for evopsych researchers, more so than for pretty much any other evolutionary biologist, because such mapping (i.e., the details of how phenotypes are causally related to genotypes) is made much more complex in humans by the existence of an enormous amount of behavioral plasticity, much of which is induced by a pesky little thing called culture, and all of which makes it pretty difficult (though not necessarily impossible) to test adaptive hypotheses about modern human behavior.

After having dismissed Myers, Kurzban moves on to some good news for evopsych: Jerry Coyne's alleged "conversion" to the field: "Jerry Coyne’s conversion I think serves as a powerful example. His journey from staunch critic to defender of the discipline illustrates that smart people who know a lot about biology can be persuaded. Some of the field’s critics might be induced to read the primary literature, as Coyne did. More deeply, Coyne’s public change of heart, I think, will make it easier for others to say they were wrong." (Note the use of religiously inspired terminology, such as "conversion" and "journey.")

But did Jerry change his position so dramatically? I went and checked what he actually wrote, and it doesn't sound at all like what Kurzban so enthusiastically described. Jerry confirms his (harsh) criticism of evopsych researchers like Randy Thornhill and Craig Palmer (them of "rape is an adaptive strategy" fame), as well as of much of "pop" evopsych (citing as one of the most ridiculous recent examples David Brooks' latest book - essentially a Republican fantasy of how things are and therefore ought to be in the world).

Nonetheless, Coyne continues, the field is, ahem, evolving, and getting better. There are some serious researchers who actually pay attention to the testability of their hypotheses, and who try to be careful about what they say when they write for the public. I don't know many critics - either within biology or in philosophy of science - who would disagree with that kind of cautious assessment. When Jonathan Kaplan and I wrote about evopsych in our Making Sense of Evolution we were careful to draw exactly the same distinctions that Jerry draws. I know there are misguided postmodernists out there who reject evopsych no matter what, but most thoughtful commentators have never done that, just like current critics of the excesses of neuroscience do not thereby dismiss it as phrenology.

That said, I still don't think Jerry's criticism of evopsych goes far enough, for one very important - but also, I would think, very obvious - reason: human beings really do present special challenges when it comes to the scientific study of their behavior, especially of the evolution of that behavior.

To get us started, let's look at some of the entries in Jerry's list of recent successes (or at least examples of progress) in evopsych. Some are obvious and hard to dispute: incest avoidance, innate fear of dangerous animals, parent-offspring conflicts, and the like. As Kaplan and I (and plenty of others) have pointed out, these are the areas where evopsych is at its strongest because the target behaviors are common among mammals, or at least primates. Which means that phylogenetic comparative analyses - one of the best hypothesis testing tools at the disposal of evolutionary biologists - work well.

Other examples are a bit odd. Jerry mentions, for instance, the evolution of sexual dimorphism (differences in size between male and female) and the evolution of concealed ovulation in human females. These are actually morphological, not behavioral traits, though they certainly influence behavior (and perhaps have been historically influenced by behavior). One needs to be careful about not unduly expanding the domain of evopsych to include every human trait, or it becomes too easy to claim success. (For instance: yeah, human females evolved larger breasts than men because they nurse their babies. I doubt even a postmodernist would try to culturally relativize that one!)

Jerry also mentions traits that are variable within the human species (as opposed to the classical focus of evopsych, human universals), for instance offspring numbers across societies, or physical and physiological differences among ethnic groups (though, again, why would the latter count as behavior is a bit puzzling). Kaplan and I also highlighted this area (systematic variation within Homo sapiens) as potentially fruitful for evopsych, though caution needs to be exercised because some of these traits (e.g., offspring number) could vary at least in part as a result of cultural forces, not genetic evolution (just think of the differences between, say, some fundamentalist religious groups and many mainstream ones: in societies where the former are in significant numbers the birthrate will be much higher than in societies where religious fundamentalism is numerically insignificant, but I would guess that culture, rather than genetics, is doing much of the work here).

Jerry also counts as a success for evopsych research on gene-culture co-evolution, as in the famous case of lactose intolerance. Which is odd, because that approach is usually seen as significantly distinct from evopsych (it's based on the extension of standard population genetics models to cultural evolution), and at any rate has had somewhat limited success (there aren't that many documented cases around, other than the oft-cited lactose intolerance).

Things become seriously iffy with yet another group of examples advanced by Jerry as positive entries in the evopsych column: the evolution of language and the evolution of morality. Steven Pinker's interesting speculations aside, we really don't have much of a hold on the evolution of language, for the simple reason that it is a classical worst case scenario for evopsych: it is unique to humans (yes, yes, other animals communicate, but language is a whole different beast) and not really variable within humans - except for pathologies - which means that comparative phylogenetic studies are out; so, of course, is the fossil record (except insofar that tells us when we evolved the anatomy necessary for language); and, needless to say, we have no access to direct measurements of relevant selective pressures. Yes, something can be learned by the study of the (very complex) genetics underlying language abilities, but it is hard to see how one can significantly move away from the sort of "just-so" stories for which evopsych is infamous. (If these stories are instead presented as untested but reasonable scenarios, then it's a different matter.)

As for morality, I am the first to agree that Frans de  Waal-type studies with other primates provide the basis for interesting speculations on how it evolved, but let's remember that his comparative studies are based on an extremely reduced number of species, that these species are pretty distantly related to us, and that they show very significant differences among themselves in terms of prosocial and pre-moral behavior. Not to mention that human morality is exceedingly more complicated than any animal equivalent because, you guessed it, of cultural evolution.

Which brings me to the crucial point where I disagree with Jerry about evopsych, in this case (which is unusual, believe me) in the sense that I am more conservative than he is. As Jerry puts it in his post: "My position has always been that good evolutionary psychology should
meet the evidentiary standards of papers on the evolutionary significance of behavior in other animals ... Those who dismiss evolutionary psychology on the grounds that it’s mere 'storytelling' ... if they are to be consistent, they must also dismiss any studies of the evolutionary basis of animal behavior."

Well, no, that's really moving the bar too low. Sure, evopsych research has to meet at the very least the standards of research on animal behavior (and believe me, a number of evopsych studies don't, though some certainly do). But human beings are far more complex and flexible (the technical term is plastic) in their behavior, and far less beholden to their genetic leash, than any other species on the planet, largely of course because of the power of cultural evolution. That means that evopsych researchers need to be much more careful in their studies than animal behaviorists, for precisely the same reasons that research psychologists get a lot more headaches while carrying out their work than their colleagues studying mice or fruit flies.

So, I agree with Jerry that it is silly to reject evopsych outright. It is a borderline field that can easily produce crap as well as good stuff. Therefor, criticism from the outside is vital in keeping evopsych tilting away from the former and increasingly toward the latter. But a rejection of certain conclusions alleged by evopsych does not at all require an equal rejection of animal behavior research. The standards ought to be higher.
Posted by Unknown at 7:00 AM