Tear Down The Wall: Psychoanalysts Suppress Documentary on Autism 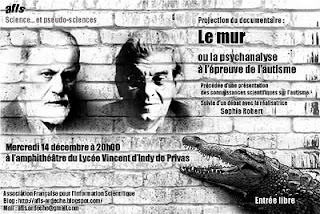 [This is a guest post by Maarten Boudry. Maarten is a fellow of the Flemish Fund for Scientific Research at Ghent University. After earning a Master’s degree in Philosophy, he followed a postgraduate program in Logic, History and Philosophy of Science. He has defended a PhD thesis on irrationality and the structure of pseudoscience, and has published papers on that subject in Philosophia, Foundations of Science and Quarterly Review of Biology. His other research interests include the conflict between science and religion, skepticism, scientific naturalism and the philosophical implications of evolutionary theory. He is co-editor, with Massimo, of the forthcoming The Philosophy of Pseudoscience: Reconsidering the Demarcation Problem, to be published by the University of Chicago Press.]

The French documentary film The Wall (Le mur), which takes issue with psychoanalytic views on autism, has caused some uproar over the past few months, even drawing attention from The New York Times. France is one of the last remaining bulwarks of psychoanalysis, the theory and therapy devised by Sigmund Freud and further developed by his countless acolytes. In most of the Anglo-Saxon world, the influence of psychoanalysis has steadily waned over the past decades (except in the humanities and cultural studies), but the public health sector and academic psychology departments in France are still largely dominated by psychoanalysts, particularly the followers of the charismatic Jacques Lacan, who was one of the major targets of Alan Sokal and Jean Bricmont’s book Intellectual Impostures. In most other countries, different variants of cognitive-behavioral therapy (CBT) are regarded as the standard treatment for autism (and for several other psychological afflictions). French psychoanalysts continue resisting this approach, because they (falsely) regard it as a reductionist approach that solely focuses on behavior change and neglects the subjective dimension of psychological illness. In The Wall, we see a number of psychoanalysts explaining the onset of autism, a neurological condition with an important hereditary factor,  in terms of unresolved oedipal dramas and intersubjective struggles.

Three of the dozen or so analysts who appear in The Wall (Alexandre Stevens, Esthela Solano and Eric Laurent), all of Lacanian stripe, have sued filmmaker Sophie Robert for defamation, claiming that The Wall’s depiction of their views is tendentious, that their views have been distorted through editing, and that the film is a diatribe against psychoanalysis instead of a sober assessment of the theory and therapy. Surprisingly, a court in Lille has partly put the analysts in the right, banning The Wall and sentencing Robert to cough up a compensation fee of hundreds of thousands of euros.

If you think The Wall is manipulative propaganda, you’ve never seen manipulative propaganda. The 9/11 conspiracy film Loose Change, for example, is a typical piece of cut-and-paste work: mostly snippets of a few seconds, taken out of context and disingenuously strung together to serve the needs of the filmmakers. The distortions of Loose Change were well documented on the blog Screw Loose Change and by other conspiracy debunkers. What we see in The Wall, however, are psychoanalysts answering questions and holding forth about autism at length, sometimes in uninterrupted sequences of almost a minute. The followers of Freud and Lacan have been remarkably unforthcoming about the alleged misrepresentations of The Wall, complaining mainly about the “polemic” tone of the film and only vaguely referring to misleading editing work.

The judge’s motivation does not provide a smoking gun either. In fact, it would simply outlaw any form of creative post-filming editing. Ironically, the judge charges Robert with leaving out material that even further attests to the bizarre views of Lacanian psychoanalysts. For example, one of the three psychoanalysts is shown saying that sometimes autism is caused by the mother being depressed at birth or while the child is in utero. Misrepresentation of his views, says the judge, because off-screen he adds that autism is foremost a “choice” made by the child itself. Apparently, parents do influence this flight into autism, but only the child itself takes “responsibility.” Such a bizarre position goes out of the frying pan into the fire. The judge, however, thinks it is a “very nuanced view” that gets insufficient attention in The Wall (one wonders why a judge pronounces on such matters). Should we blame Sophie Robert for failing to unearth even more pseudoscientific speculations?

In spite of Robert’s editing work, anyone who bothers to sit through the whole documentary will see a prime example of self-incrimination, with all sorts of bizarre pronouncements that are really self-explanatory, and that derive from a long psychoanalytic tradition of blaming autism on flawed relationships with parents (Bruno Bettelheim, Jacques Lacan, Françoise Dolto). For example, we learn that fathers need to intervene in the mother-child relationship in order to prevent their sexual fusion; that all mothers experience a period of “maternal madness” after pregnancy; that every mother-child relationship is intrinsically incestuous; that the autistic child “refuses” to enter into the world of language because it is “sick of language”; that some fathers are impotent and pathogenic; that one function of the placenta is to mediate between the murderous desires of mother and fetus during pregnancy (!); and that the psychological damage of father-daughter incest is not much to worry about.

Not all of those exotic views are shared by all the interviewed analysts, of course. Indeed, if you consult two psychoanalysts on any given subject, you usually end up with three different opinions. The analysts in The Wall have one thing in common, though: they revel in the same baseless and gratuitous psychoanalytic method, and they display the same cavalier disregard for careful scientific theorizing about the human mind. Particularly harrowing is the bleak view expressed by many Lacanian analysts about the expected benefits of their (or any form of) therapy (“the pleasure of taking interest in a soap bubble,” says one analyst after an embarrassing silence). This reflects another central tenet of Lacanian psychoanalysis: we cannot be cured from the human condition, and the symptoms developed by a patient constitute his or her way of coping with the ineluctable “knot” into which we humans tie ourselves (hence the “choice” for autism). Instead of fostering false hopes, or so the Lacanians claim, we should resign to this state of affairs. To try to get rid of debilitating symptoms, as cognitive behavioral therapists try to do, is to eradicate the dimension of human subjectivity. Such defeatism is appalling in view of the evidence-based therapeutic interventions for dealing with conditions such as autism.

To be sure, some parts of The Wall have been substantially edited (as is the case in any documentary film), but the three psychoanalysts have not given a single instance of editing work that has led to gross misrepresentation. Examples where questions and answers have been shuffled to improve the flow of the storyline hardly make a difference to the arguments presented. In one or two instances, the editing process may be regarded as glancing over some nuances, or insufficiently discriminating between different viewpoints. In a theoretical mess such as Lacanian psychoanalysis, however, with its obscure and byzantine doctrine about subjective development, one can always blame the critic of missing such or such theoretical subtlety. To Robert’s credit, she has taken pains to clear away the fog surrounding (Lacanian) psychoanalysis, and to crisply demonstrate what the psychoanalytic view of autism comes down to.

The other charges against Sophie Robert are simply ridiculous. The film is accused of being “polemic,” as if this was a thought crime in itself. A film maker has the right to express his or her views on a subject, and to take sides if (s)he feels morally obliged to do so. Would any sensible person be able to make a documentary about homeopathy, astrology or Scientology and manage to remain studiously evenhanded about the subject matter? The polemic tone of the film is perfectly justified in light of the outrageous claims made by the Lacanian psychoanalysts themselves. And even if Robert had seriously misrepresented the views of some of her interviewees, the latter could have written a formal response instead of dragging a young filmmaker into court and demanding exorbitant compensation fees (€ 300,000 in total).

This ruling is a blatant violation of the right to free speech and free dissemination of information. All interviewees had signed an agreement disowning their rights to the footage and acknowledging that the material would be edited. Although freedom of speech ends where libel and slander begin, psychoanalysts have not even come close to showing that such is the case. Naturally, Sophie Robert has appealed against the judge’s ruling. In the meantime, Lacanian psychoanalysts who (understandably) have tried to ban this 52-minute long embarrassment for their discipline, will have to countenance the so-called Streisand effect: attempts to censor information on the internet will almost inevitably backfire, by attracting more attention and furthering its dissemination. And you, dear reader, are complicit in this strange phenomenon!

—
Visit the website ‘Support the Wall’
Posted by Unknown at 11:17 AM